The Reserve Bank of India (RBI) has released numbers that show how most of the currency notes that were cancelled were deposited in banks. Now that we know that 99% of demonetised money has come back, the government’s estimates of how much black money would be extinguished have been proven wrong.  As the RBI’s latest annual report has confirmed, Rs 15.28 lakh crore or 99 per cent of the Rs 15.44 lakh crore worth of the notes withdrawn overnight on November 8 was turned in. Thus, almost all demonetised notes have been returned to the central bank, including the stock of black money held as cash.

The total reduction in black money was much smaller than what might have been envisaged. To the extent that it was possible to exchange money legally, individuals did so. After that it was done illegally.

It is still quite possible that demonetisation will have positive consequences over a longer period— the growth in the direct tax base, the switch in the financial holdings of households from cash to bank deposits, and the increased use of digital payments. The question to be asked is whether the potential long-term benefits will be greater than the short-term costs that the Indian economy had to bear.

The Centre has approved major reforms for the Indian Army aimed at enhancing combat capabilities and rebalancing defence expenditure. This will be the first such exercise since Independence and will involve restructuring British era systems. Posts of 57,000 officers, soldiers and civilians will be restructured and the Army would have state of art regimen and better logistic support units after the overhaul. This phase of reforms, which concern only the army, will be completed by end-2019.
There will be major changes to optimise signal establishments that handle the Army’s communication networks, restructuring repair echelons, redeploying ordnance echelons, better utilisation of transport echelons and closure of military farms and Army postal establishments in peace locations. 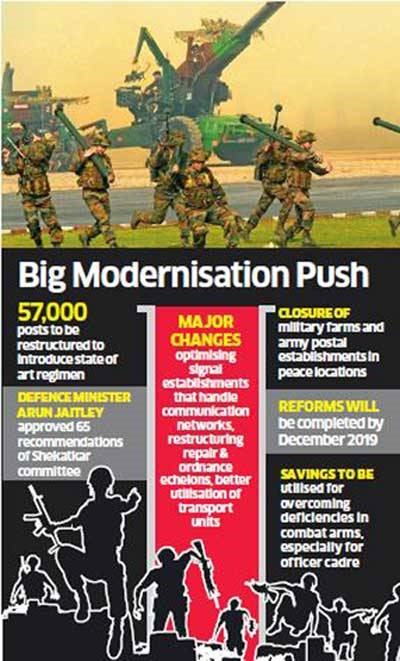 These reforms emanate from the recommendations of an expert committee headed by Lt General D.B. Shekatkar (retd), which was tasked to recommend measures for enhancing combat capability and rebalancing defence expenditure.
The committee submitted its report in December last year, and its 188 recommendations have been studied and debated by the ministry and the defence services.
The defence ministry has chosen 99 recommendations which pertain to the army, navy and air force — 65 of them, which are internal to the army, have been approved for implementation in this phase.
It is believed that the other 34, which are internal to the air force and the navy, will also be implemented soon.

Also, following proposals from various committees needs to be implemented-

The approval of the Union cabinet for the first phase of reforms in the armed forces is a welcome step. With a live threat from both China and Pakistan, defence reforms are an urgent need of the hour. The first steps with restructuring the army are important but they must be quickly followed by implementation of other recommendations, particularly those of higher defence management. Anything less will be another opportunity lost.

How Gorakhpur was choked?

What the tragedies in the 70th year of independence tells us

It’s not end of days