For years, Indian lenders, especially state-run banks, were engaged in volume game to balloon their balance sheets and appease their promoter (the government). That has been so ever since nationalisation of these banks happened in two stages (beginning 1969). Governments often treated these banks as their extended arms and used them for populist measures.

There was a time from 2011-13 when every bank rushed to give money to corporations, no matter what the credit perception was as everyone expected a miraculous pick-up in the economy. 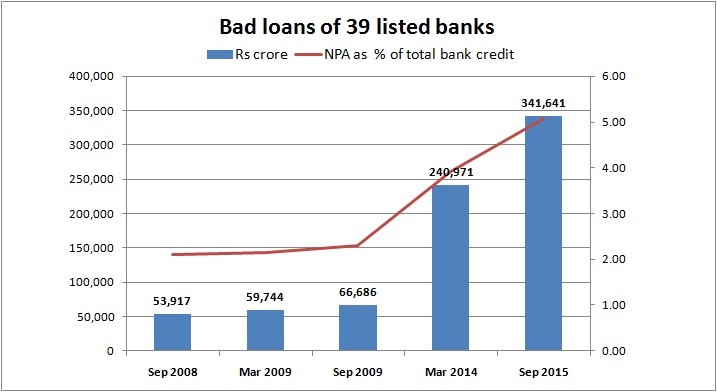 Today, the total values of NPAs in India is 6 lakh crore.

NPA in terms of RBI regulations result out of non-payment of interest for a period of 90 days or non-payment of principle amount for 90 days or more. So beyond that point, it is called Non-Performing Asset. The loan is taken by the company on its assets from the bank. When the asset is not performing because they become doubtful and NPAs from doubtful become bad loans.

Can’t collateral be used to write off loans?

When the banks give loans, they take something from the entity taking it as collateral for that loan. Lot of people give collaterals but in case of large projects, it is not possible to give collaterals. In such cases, the land purchase, the building purchase, the plant machines, the debtors and inventory are mortgaged to the bank.

These assets are available but if they are able to produce enough to really repay to the bank remains doubtful.

The banks have the right to sell the assets. But selling is not the question. When these assets are sold in distress, there is chance that against Rs. 50000 crore loan, the banks get only Rs. 20000 crores.

Out of 6 lakh crores, 80-90% of them large borrowers. Now the government doesn’t want to kill these companies, create employment problems and take people’s job. Huge areas such as steel, cements, energy industries are country’s development backbone. Such companies cannot be shut down and hence there bad loans are continued to be carried forward.

After 2008, there was international financial crisis. The prices have fallen significantly in the international market. In last two years the commodity market is very bad for example, the Sugar industry and steel industry. Power sector was not operating properly. Halfway through the plants being operational, the banks stopped giving them money due to policy paralysis.

Had the financial planning and financial management not compromised while giving the loans, the issue wouldn’t have been this grave. In certain cases, the money has been diverted by entrepreneurs, they did not bring in promoters, did over invoicing of expenditure and took out money from that. So all kinds of speculations are there which led to increase in NPAs.

The rate of interest is so high that at times the people are unable to pay it back. There are policy errors when the government policy change and the enabling environment is not there.

Many banks, especially PSBs do a lot of work. They do PSL, they give educational loans and housing loans. Because of bad loans, the entire system of PSBs, their priorities are compromised and entire structure gets vulnerable. However, it doesn’t mean private sector banks have suffered less due to NPAs.

Start up, initial capital, turn business into amateur industry. They should take the risk as far as possible. Whatever money they take as loan is for repayment. People who pay the banks in time keep on growing and prospering.

Unfortunately, a tendency has come to a section of borrowers that this money of bank is like a free money. This kind of feeling is a major reason for the disaster. Lot of people don’t have enough capital on their own. Only those succeed who plan with due care. Contingency is important.  When going for larger projects, there should be more concentration on equity and borrowing kept on minimum. The capital inflow is not much in India. So the government has to plan regarding the same.

Capital can be channelized into equity and people can expand business.

Another idea is to create a bad bank which would be a centralised agency that would take over the largest and most difficult stressed loans from public sector banks in order to help clean their balance sheets, and would take politically tough decisions to reduce debt, providing an impetus to further lending to spur economic activity.

NPAs will cause pain to banks by those who have not paid back the loan. But some part of the money have to come back to the system as it is common man’s money.

RSTV- The Big Picture : A War Room for Investments: Will it work Wonders?