The Central Reserve Police Force lost 40 personnel in two Maoist attacks in the first half of 2017 in Sukma, the most severely Maoist-affected district of Chhattisgarh. Though the forces were jolted by these attacks, their spirit to fight back has not dampened. Rather, they continue to undertake challenging development work in the red corridor areas.
This shows how the paradigm on tackling Maoism has changed over time.
The government’s response has matured in terms of deliverance — from reactive it has become proactive, and from localised it has become holistic.

The Red Corridor is the region in the eastern, central and the southern parts of India that experience considerable Naxalite–Maoist insurgency. These are also areas that suffer from the greatest illiteracy, poverty and overpopulation in modern India, and span parts of Andhra Pradesh, Bihar, Chhattisgarh, Jharkhand, Madhya Pradesh, Maharashtra, Odisha, Telangana, and West Bengal and eastern Uttar Pradesh states. 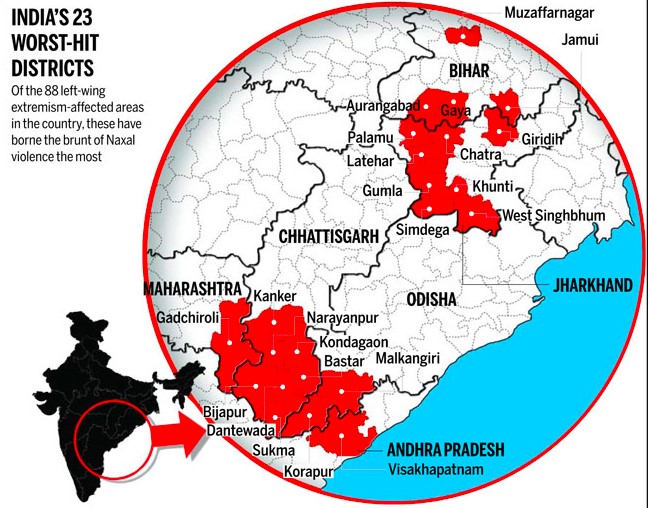 Security forces are no longer reactive.

The Maoist problem is not merely a law and order issue.
A permanent solution lies in eliminating the root cause of the problem that led to the alienation of tribals in this area.

If the youth are constructively engaged by the government, the recruitment of youth by the Maoists will slowly stop.

Winning a psychological war against the Maoists remains an unfinished task.
Though the government’s rehabilitation policies have helped the surrendered cadres turn their lives around, security personnel are still accused of being informers and are killed. A permanent solution lies in reversing the alienation of tribals.
To end this, civil society must join hands with the government in realising the villagers’ right to development.
Loopholes in implementing government schemes must not be used as a tool to strengthen the hands of the Maoists. Indian democracy is strong enough to absorb even its adversaries if they abjure violence.

Conclusion:
The two-pronged policy of direct action by the security forces combined with development is showing results — the government has already made a dent in most of the affected districts and is determined to check the expansion of Maoists. The paradigm of proactive policing and holistic development should ensure more such significant results in the future.
However, for the success of Winning Hearts and Minds (WHAM) strategy it is essential that the civil society is roped in.

Since Independence, several attempts have been made towards financial inclusion of the poor, particularly in rural areas.
The initiatives include the cooperative movement, followed by priority sector lending, lead bank scheme, service area approach, creation of National Bank for Agriculture and Rural development, introduction of regional rural banks/ local area banks, microfinance, kisan credit cards, business correspondence and finally Pradhan Mantri Jan-Dhan Yojana.
It is time to introspect as to why these programmes have not been effective in improving economic conditions of the poor people.

The outcome of earlier financial inclusion programmes has been much below expectations.

In order to provide banking services at reasonable costs to the poor people, the business correspondents model was introduced in 2006.
Being technology driven, the BC model played a critical role in opening large number of Jan-Dhan accounts during the recent period, but was unable to provide basic banking services to them for several reasons.

Why BC model failed?

The Government should pool all resources under several rural development schemes and provide a scheme-based permanent source of income through gainful employment to the rural people. Although, schemes may vary from state-to-state, it would provide a constant source of income and make the financial inclusion truly demand-driven.

This year on Jerusalem

The rise and fall of the WTO

A glimmer of hope

Catching up on information statecraft