What is Wassenaar Arrangement? 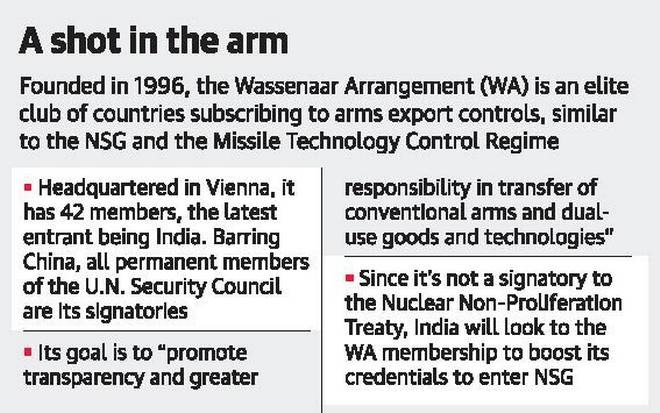 ·         The Supreme Court recently said the provision of adultery, the Section 497 of the IPC, treats a married woman as her husband’s “subordinate.”

·         The court admitted a petition to drop adultery as a criminal offence from the statute book.

·         “Time has come when the society must realise that a woman is equal to a man in every respect,” the Supreme Court recorded.

·         Terming the provision “quite archaic,” the court observed in the order that when society progresses, rights are conformed and a new generation of thoughts should spring forth.

Part of: Mains GS Paper II- Government policies and interventions for development in various sectors and issues arising out of their design and implementation

The FSSAI, through its Friday order, said that

U.S. President Donald Trump has recognised Jerusalem as Israel’s capital. The decision endlessly given international public opinion and the political and moral sensitivity of the issue.

·         The U.S. has largely favoured Israel throughout the Israeli occupation of the Palestinian territories and East Jerusalem.

·         It has offered protection to Israel in the UN Security Council, come to its aid in times of crises, and provided it with advanced weapons.

·         The U.S. has even looked away when Israel was amassing nuclear weapons.

This could have been used as an opening to break the logjam in the peace process.

Israel’s history suggests that it will not agree to any compromise unless it is forced to do so. Over the years, it has continued its illegal settlements in the occupied territories despite repeated warnings from the international community. The only country that can put effective pressure on Israel is the U.S. The country should thus play a responsible role in the region.

Antibiotic resistance in the environment

The 2017 National Action Plan on Antimicrobial Resistance talks about limiting antibiotics in effluent being dumped by drug makers into the environment.
This is because when these drugs taint soil and water, the scores of microbes that live there grow drug-resistant.
Until now, India’s fight against antibiotic-resistance was focussed on getting people to cut down on unnecessary antibiotic consumption. Having too many antibiotics causes bodily pathogens to resist these miracle drugs.

Typically, a pathogen can take two routes to antibiotic resistance.

Scientists believe that many human pathogens today picked up their resistance genes from the environment.

When humans starting manufacturing antibiotics in the 1950s, a dramatic shift occurred. Large doses of these drugs seeped into the environment through poultry and human excreta, and waste water from drug makers and hospitals. This led to an explosion of resistance genes in soil and water microbes.
Investigators in 2007 had found that water in an Indian pharma effluent treatment plant had both high levels of antibiotics as well as novel resistance genes, never seen in microbes elsewhere.

The resistant genes are likely to make the journey from living harmlessly in environmental bacteria to human pathogens that sicken people.
The flow of genes from the environment to humans is a rare event. Instead, most transmission happens from one human to another.
But the rarity isn’t reason to lower our guard.
We live in unprecedented times where environmental bacteria, pathogens and antibiotics are mixing like never before. This means such rare events are almost inevitable.

If India doesn’t move quickly, wastewater in pharma clusters could give rise to new genes as dangerous as NDM-1. Once such genes enter in humans, they will spread across the planet.

When every breath kills

US is sabotaging the WTO from within

A nudge for climate capital