1. What are cratons? How do they differ from shields? Discuss the distribution of major shields of the world. Also comment on their geological significance.

A craton is an old and stable part of the continental lithosphere, where the lithosphere consists of the Earth’s two topmost layers, the crustand the uppermost mantle. Having often survived cycles of merging and rifting of continents, cratons are generally found in the interiors of tectonic plates. They are characteristically composed of ancient crystalline basement rock, which may be covered by younger sedimentary rock. They have a thick crust and deep lithospheric roots that extend as much as several hundred kilometres into the Earth’s mantle. 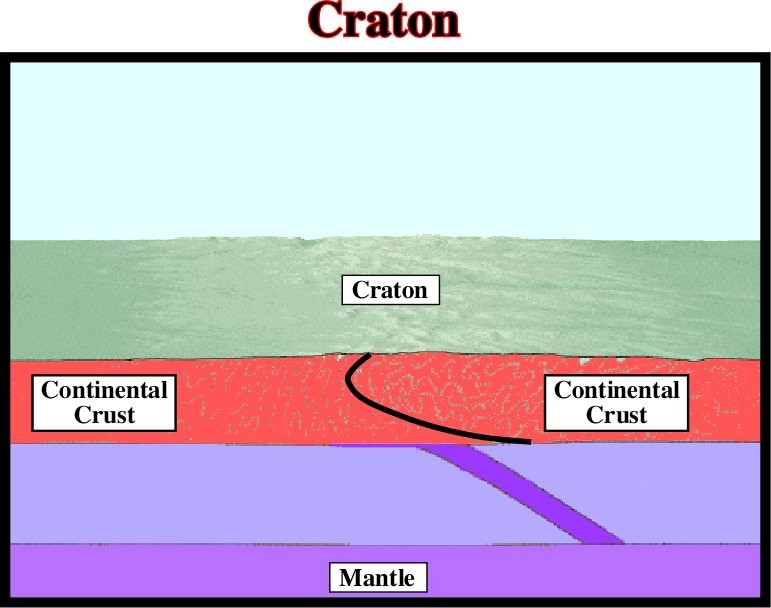 How do they differ from shields?

Cratons whose ancient rocks are widely exposed at the surface, often with relatively subdued relief, are known as shields. If the ancient rocks are largely overlain by a cover of younger rocks then the ‘hidden’ craton may be referred to as a platform.

The distribution of major shields of the world 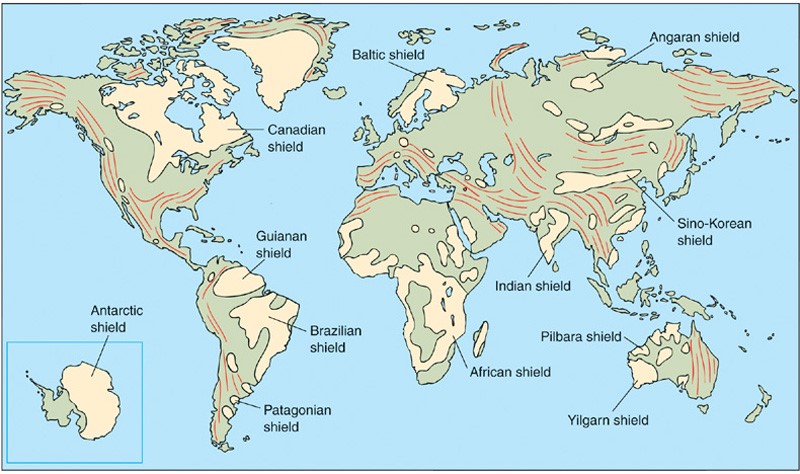 Shields are normally the nucleus of continents and most are bordered by belts of folded Cambrian rocks.

These Shields is rich in natural resources, including minerals, forests and freshwater.

Various minerals and precious stones have been mined or continue to be mined on the Shield, including gold, silver, copper, zinc, nickel, iron, uranium and diamonds.

2. What is a coastline? How do coastlines get their shape? Are coastlines transforming due to climate change? Examine. What will be its consequence for the low lying coastal regions? Discuss.

In introduction, define what is coastline. Then in body part, start with how coastline get their shape. 2nd part, mention how due to climate change coastlines are getting transformed. Then final part, write what are the consequences for low lying regions.

Note: Don’t use too much of technical words, this is GS answer. Use words from basic NCERT.

A coastline also called as seashore is the area where land meets the sea or ocean, or a line that forms the boundary between the land and the ocean or a lake. India has a coastline of 7516.6km covering Main land and Islands.

Points to be covered:

How coastline get their shape:

Coastlines are transforming due to climate change:

Climate change is a manmade disaster waiting to happen. Necessary steps have to be taken to reverse climate change. World countries should come forward to limit the climate change as agreed upon in Paris climate conference to create a sustainable future.

3. What is calving? What are the factors that cause calving? How does calving affect the glaciers? Also examine the effects of glacier retreat on the climate.

It is a pretty straight forward question. The points to are to be noted while answering this question is that, this question has got 4 parts. The answer for all parts is to be written distinctly so that the examiner can make out that no aspect is left.

Since each of these sub questions will be carrying individual marks, writing too much detail for one part and ignoring other will not help.

Calving process by which ice breaks off a glacier’s terminus; usually the term is reserved for tidewater glaciers or glaciers that end in lakes, but it can refer to ice that falls from hanging glaciers.

It is the sudden release and breaking away of a mass of ice from a glacier, iceberg, ice front, ice shelf, or crevasse. The ice that breaks away can be classified as an iceberg, but may also be a growler, bergy bit, or a crevasse wall breakaway

Watch this amazing video of calving. This is the largest calving ever recorded in history:

Calving is the natural process through which glaciers lose mass. The calving process begins when a rift opens in the edge of a glacier, caused by wind or water erosion, melting ice, or other events that cause the glacier to become unstable.

This crack in the ice ultimately causes a block to break away from the land and form an iceberg, which falls into the ocean. More ice from the land flows in behind it and breaks off next.

Some of the processes through which calving occurs are:

Longitudinal stretching of glaciers – When glaciers extend in ocean or lake water, the crevasse/rift increases in the ice because of pressure and it breaks from several joints.

Tidal and seismic activities – the daily rise and fall of sea water because of tides and seismicity of a region can also trigger calving.

Buoyant Force – Buoyant force of sea water cause the submerged foot of ice to break. Sometimes these events can be very violent as ice is forced to move up.

Calving is a natural part of a glacier’s life cycle to a certain extent, but the extreme rate at which these glaciers are calving is what’s incredible and worrying: between 2000 and 2010, this glacier retreated nine miles – further than it had retreated in the previous 100 years combined. Scientists say its current flow rate, the rate at which the glacier drops ice into the ocean, is three times what it was in the 1990s.

As the ice is weakened, the glaciers starts to move quickly and are prone to melting and ablation. Calving cause receding glaciers.

Note: You can add more points in this section. Keep in mind that only climatic impact is asked. Do not write impact on economy, society etc.

Arctic sea ice is declining rapidly, with the seasonal low in summer shrinking particularly quickly. Scientists have different ways to predict Arctic sea ice decline. If melting continues as it has in recent years, it could be as soon as 2020, but climate models suggest it won’t happen until 2040 or later.

A stunning decline in the sea ice covering the northern polar regions — a more than 50 percent drop in extent in summer, and an even steeper reduction in ice volume. Just a few decades ago, ice 10 to 12 feet thick covered the North Pole, with sub-surface ice ridges in some parts of the Arctic extending down to 150 feet. In 2017, that ice is long gone, while the total volume of Arctic sea ice in late summer has declined, according to two estimates, by 75 percent in half a century.

The top of the world is turning from white to blue in summer as the ice that has long covered the north polar seas melts away. This monumental change is triggering a cascade of effects that will amplify global warming and could destabilize the global climate system.

Best Answer: no best answer For this question.

5. What is Bitcoin? Why has Bitcoin’s value risen so high? Are concerns about its volatility justified? Discuss.

Bitcoin is a cryptocurrency or digital currency based on Block Chain technology. It was first started by an anonymous person Sakoshi Nakomoto in 2006.
Other crypto currencies are Ethereum, IOTA etc. They all are ‘mined’ using complex algorithms in high speed computers.

Reasons behind rise in its value:

The volatility can erode people’s hard earned savings and governments should thus bring up regulations.
Even as the price of Bitcoins rise higher, opinion on Crypto Currency remains divided, for some it seems to be a boon and for rest it is fraud.

Despite its concerns, Bitcoins have a potential place in the digital economy. IT is high time that governments clarify its position on Bitcoins. This will end the policy uncertainty which is in part responsible for the bubble in Bitcoin. The recent RBI study on blockchain technology is a step in the right direction.