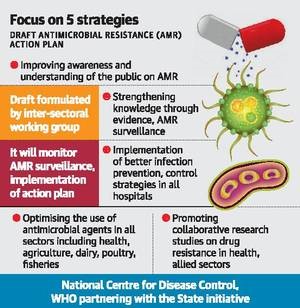 The concept of One Health:

Kerala will be dealing with the AMR situation from the ‘One Health’ platform.
One Health is a fairly recent global concept that the health of humans is linked to the health of animals and environment).

Inefficient land use by government

Introduction- the problem of unused land:

A large proportion of government land lies unused.
The Ministries of Railways and Defence, respectively, have 43,000 hectares and 32,780 hectares of land lying vacant, without even any proposed use. According to reports of the Comptroller and Auditor General of India (CAG), the 13 major port trusts have 14,728 hectares of land lying idle.
Land is a crucial and often constraining input for production, not only in agriculture but also in secondary and tertiary sectors.
The problem of land scarcity has been aggravated by grossly wasteful land use by government agencies. While stock of land is fixed, its supply as an input in production is not — it crucially depends on land use patterns.

The problem of inefficient land use by government departments and public sector units is complicated and endemic. Given the importance of land for the country, we need to be creative in finding solutions.
As a first step, the government should agree to disclose its land use and release of excess land, the use of which it cannot justify.

Achieving SDGs in an effective manner

The United Nations’ Sustainable Development Goals (SDGs) are inspiring many people around the world. It seems there is a consensus about the goals. The question is, how can the stakeholders work together more effectively to achieve them.

The Club of Rome warned in 1972 that humanity would face a “Tragedy of the Commons” if it persisted with its paradigm of economic growth. Its warnings were largely ignored. Since then, more reforms within the prevalent paradigm enabled long periods of economic growth around the world. Meanwhile, systemic problems of environmental degradation, climate change, and economic inequities got worse. The SDGs are a realization that humanity cannot postpone much longer the development of new strategies for the management of the commons.

These fall into four groups.

Problems such as persistent poverty and inequality, poor health, and environmental degradation that the SDGs aim to solve are systemic issues. They have multiple interacting causes.
They cannot be solved by any one actor.

Working with the commons:

Philanthropists are “giving back” to society in programmes aligned with the SDGs—as are business corporations through CSR (corporate social responsibility). Philanthropists and corporates ties up with NGOs.
Large, international NGOs, working on any issue around the world—such as the care of children, the concerns of the elderly, or the protection of the environment—know that they must work in partnership with local communities.
“Government by the people”, which is the essence of good, democratic governance, requires government executives to work with local communities to improve the commons.

The issue is that Governments construct centralized, top-down programmes. And corporate CSR, as well as international NGO programmes, are managed centrally to achieve scale and to improve efficiency by deploying best practices.

There are three problems with this approach.

Strong institutions founded on principles of partnership, cooperation, and universal justice, which the last two SDGs underline, are essential.

A new model of enterprises is required:

Faster progress towards the SDGs will require new models of enterprises in which the people must have a much greater say in governance.

The tragedy of the commons is caused by the clash of two sets of rights along with two fundamental principles of good governance.
The fundamental principle driving democracy is human rights. Every individual, rich or poor, has a right to fundamental human needs such as health and education, and also to equal political rights in the governance of their societies.
The fundamental principle driving the growth of capitalist economies is the right to private property—which is consonant with a concept in economics that human beings are self-interested agents who will take care of only what they own.
These two principles lead to very different principles for the governance of enterprises.
Whereas in democratic governance every human being, even if she owns nothing, must have equal voice, in capitalist enterprises, those who own more (e.g. shares of a company) must have proportionally more weight in governance.

An innovation in enterprise design to reconcile this dilemma is the concept of “social enterprises” promoted by Muhammad Yunus and others.
The owners of social enterprise are the beneficiaries of its services and profits.
Social enterprises stand in between the domains of for-profit corporations on one side (which extract and accumulate wealth from the commons) and charity, philanthropy, and CSR on the other side (which then “give back” to repair damage to the commons and “do good”).

Strong institutions and partnerships for growth could be the keys to progress on the SDGs. Innovations in the design of cooperative institutions—of the people, by the people, for the people—are required to reconcile the democratic principle of equal human rights, with the capitalist principle of property rights.

A sum of contributions

Standing up for human rights

Give politics its due