Russian authorities have demanded ₹125 cr. to carry out repairs on INS Chakra 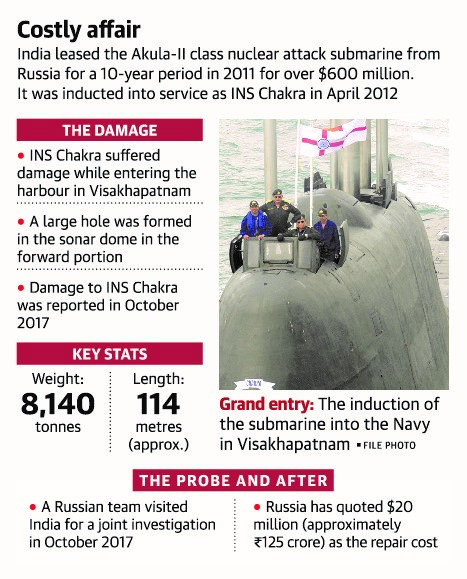 Important: India announced a voluntary target in 2015 of creating additional carbon sink of 2.5 to 3 billion tonnes of CO2 (carbon dioxide) equivalent through additional forest and tree cover by 2030.

Part of: Prelims – Persons in news

The Sahitya Akademi is an organisation dedicated to the promotion of literature in the languages of India.

India seeks to pursue a multi-dimensional engagement with West Asia.

PM Modi was conferred the ‘Grand Collar of the State of Palestine’ by President Mahmoud Abbas, recognising his key contribution to promote relations between India and Palestine.

The Grand Collar is Highest order given to foreign dignitaries — Kings, Heads of State/Government and persons of similar rank.

India hopes for Palestine to soon emerge a sovereign and independent country in a peaceful atmosphere.

PM Modi re-connected with the UAE leadership for the second time in three years. Trade and economic ties are becoming central to the India-UAE relationship.

Significance of Oman for India

Oman has been a long-standing partner of India in West Asia, where Indians constitute the largest expatriate community.

All these shows the depth of India’s foreign policy outreach in West Asia.

India’s engagement with West Asia should now focus on delivering on its commitments and strengthening its presence as an economic and security partner.

This will be crucial as traditional powers such as the U.S. and Russia are jostling militarily, even as America’s stakes in the region decline by the day. China and India, as two emerging powers, are yet to articulate a clear road map for the region.

While India is still stuck in the age-old debates of Israel-Arab rivalry, West Asia has moved on. Growing rivalry between the Sunni Arabs and Shia Iran is reshaping old relationships and India will have to be more pragmatic in its approach towards the region.

Biofuel: As an alternative fuel for transportation sector

India faces a major paradox today. While a robust transport sector fuels a growing economy and heralds the economic growth on one hand, on the other it also leaves an unsustainable carbon footprint on cities, severely impacting the health and well-being of citizens.
The transport sector is the second largest contributor to carbon dioxide.
In addition to the health costs of pollution, fossil fuel dependency of the sector continues to burden the exchequer.

Oil as only fuel for transport sector:

Over the next 20 years India’s energy intensity and fuel dependency is expected to rise. According to IEA, India’s oil demand is to rise the fastest — by 6 million barrels per day to 9.8 mb/d in 2040.

It has also projected that oil production will fall behind demand, pushing oil import dependence above 90 per cent by 2040.

Meanwhile, projections are that the transport sector will contribute to two-thirds of the rise in India’s oil demand.

E-mobility: Good but should not be the only option

The government has made a major announcement to incentivize and go all-electric by 2030.
While the thrust on e-mobility is welcome, current policies have not given similar policy support to alternative fuels, in particular the high potential of biofuels as a promising vehicular fuel.
Relying on e-mobility alone will not accomplish our ambition to create a sustainable and green transport on a pan-India basis.

We need a shift to public transport, notably buses, which are space and cost-efficient. Biofuel-run buses — private and public — present an unprecedented solution.

States with a combination of high agricultural activity and large fuel consumption like Maharasthra, Punjab and Uttar Pradesh are best positioned to exploit this opportunity.

Biofuel-driven buses in cities like Nagpur, where the government has allowed special purpose vehicles to own and operate these buses along with the plants and the depots required to fuel the buses.

The city administration has worked with a manufacturer of biofuel buses to roll out green fuel buses that not only solve the green transport problem but also a waste problem. The fuel which is used in these buses is generated from local waste, in effect converting local waste into local fuel for local transport.

Pushing for biofuel buses for public transport within a specific timeline like 2020, would help transform our public transport services, improve the health of our citizens, provide economic impetus and create jobs.

Is India ready for NHPS

Why Indian IT needs an urgent reboot