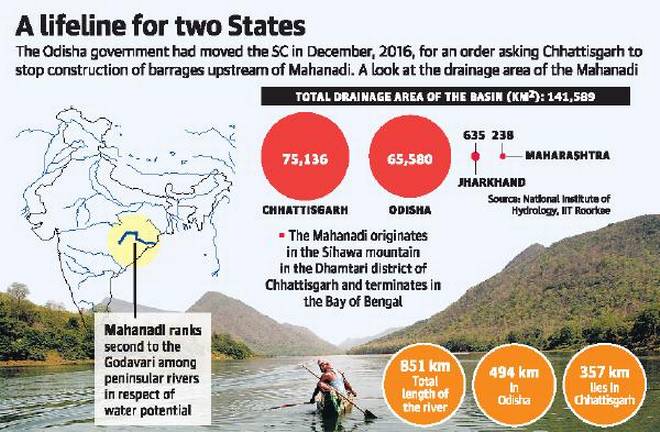 The order on constituting a new tribunal comes even as the government plans to introduce a new bill that would have a single tribunal to replace all existing water tribunals.

Issue with such tribunals:

President of Iran, Hassan Rouhani to India, was on a three day visit to India this month.

India is one of the few countries to have warm and mutually beneficial relations on all sides of the divide in West Asia including the Shia/Sunni split and the Iran/Israel rift.
Rouhani’s visit will give a decisive shot in the arm to India’s growing engagement with West Asia.

Rouhani’s visit provided a welcome opportunity to the two sides to give a vigorous push to bilateral ties in the areas of connectivity, energy, infrastructure, trade, investment, security, defence, culture and people-to-people contacts.
Rouhani’s presence in India was evidence of the keen interest that both countries have in promoting bilateral ties and taking them to the next higher level.

Rouhani is under considerable pressure both on the domestic front, in political as well economic areas, and in the realm of Iran’s international ties.

As expected, connectivity through Chabahar port emerged as one of the most significant aspects of bilateral Talks.

To maintain its credibility, India will need to ensure that there is no slackness in implementation of the project.

Gwadar port in the Baluchistan province of Pakistan is barely a 100 kms away from Chabahar and is being developed by China.
Chabahar will face stiff competition from Gwadar. India and Iran will have to make certain that to-and-fro business handled by Chabahar is significant.

Bilateral cooperation in security, defence and fight against terrorism emerged as significant areas of discussion during Rouhani’s visit. A Bilateral Extradition Treaty was signed and it was also decided to have enhanced cooperation in the maritime domain. The two countries “agreed to hold dialogue to look into measures for cooperation in defence sphere, including port calls by naval ships, training and regular exchanges of defence delegations.”

Ensuring security and stability in Afghanistan, which is vital to peace in the region, poses a challenge to both India and Iran.
Both countries desire peace in Afghanistan but their approaches are markedly different. India’s position-

Other challenges in bilateral relations relate to India’s growing ties with USA, Israel, Saudi Arabia and UAE, all of which are intractable rivals of Iran.

Both India and Iran seem to have come to the conclusion that there are a large number of areas in which their interests coincide and converge. They also recognize that they have divergent views on some issues.
Notwithstanding the fact that the two countries do not see eye to eye on some issues, India and Iran have decided to focus their energies on areas of concurrence and rapidly embark on a mutually beneficial and fruitful partnership.

Language: Much more than a means of communication

Nineteen years ago, in November 1999, the General Conference of the Unesco proclaimed February 21 as the International Mother Language Day to coincide with the Language Day Movement in Bangladesh. The genesis of this commemoration lies in widespread protests by the Bengali-speaking majority in the region, then known as East Pakistan, against the Government of Pakistan’s language policy.

A language is far more than a means of communication; it is the very condition of our humanity. Our values, our beliefs and our identity are embedded within it.

However, what is most important is to promote the use of the mother tongue.

We need to have-

A multilingual and multicultural world will be possible only by strengthening individual mother languages. Individuality and plurality can and must go hand in hand. That has been the essential Indian vision. It is the same vision that can enable us to be true Indians as well as global citizens at the same time.

India remains in the best position to help us

The politics of AI

The making of the Great Ocean of China