Q.1) INDIA MUST KEEP A WARY EYE ON CHINA’S GROWING ECONOMIC AND MILITARY INFLUENCE AND PRESENCE IN SRI LANKA. COMMENT.

The debate came into existence, when China’s increasing economic and strategic influence in Sri Lanka which has prompted alarm bells in India. In recent times, Sri Lanka has leased out its strategically important Hambantota port to a Chinese state owned firm. China now practically owns every major infrastructure project from Hambantota to Colombo. To counter china’s influence India must keep a cautious eye on china’s growing economic and military influence and presence in Srilanka.

How china is influencing Sri Lanka?

China has focused mostly on the majority Sinhala areas in the South and East. India off late has understood the limitations of this approach and is trying to diversify its investments by focusing on the South and South East regions of Sri Lanka as well. However, it’s not a question of challenging directly with Chinese investments, because China clearly outshines the scale of Indian investments due to its sheer economic might.

Sri Lanka is also a part of China’s OBOR project, which is an ambitious plan involving 68 countries that aims to revive the ancient silk route. As a result, China puts a lot of thought into its investments. They are driven not just by economic considerations but rather by strategic calculations.

How India is trying to enhance its ties with Srilanka?

It is in this context that India is trying to further its existing strong ties with Sri Lanka by enhancing its investments to counter China’s rising influence. For example, India has recently announced a joint venture with Sri Lanka to help revamp and operate its second international airport at Mattala, an ambitious project that was launched earlier but failed to generate traffic or revenue. In this regard, India need to assess whether it can deliver on its promises and match up to the inroads made by China.

India has previously concentrated its investments exclusively on the Tamil regions in Sri Lanka i.e. Northern and Eastern Provinces and had largely ignored the majority Sinhala areas of South and South Eastern Sri Lanka. For example, Indian investments like the housing project for IDP’s in the conflict hit North and East provinces, revival of Trincomalee port etc.

India has a unique advantage in Sri Lanka – it’s ‘Soft Power’ and the general goodwill it enjoys amongst Sri Lankans. India is further trying to leverage this by diversifying its investments. Thus the airport project at Mattala and the Trincomalee oil farm project with Japan is crucial to enhance India’s footprint.

India needs to pay attention to the development indicators of its neighbours. It should support these friendly countries to grow socio-economically and capitalize on the goodwill it generates to build strategic ties in order to counter China’s massive commercial and strategic investments in the region.

2. The formal resolution of the border dispute with China would free India of a huge diplomatic handicap, remove many constraints in India’s diplomacy towards its neighbours and offer India new opportunities in Asia-Pacific. Discuss.

The recent standoff between India and China at the Doklam plateau which lies at a tri-junction between the India, China, and Bhutan has brought the issue of border dispute between the two nations in limelight. 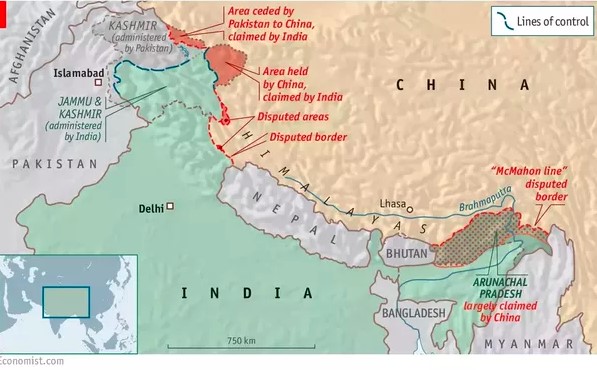 Border disputes between India and China have been a major bone of contention between the two nations. Successful resolution would result into multiple benefits like-

Remove constraints in Indian diplomacy towards our neighbors:

Given the stakes are high as the global power centre is shifting from Pacific to Indian ocean, the two nations need to show diplomatic skill to solve the long-standing issue of border dispute.

India has one of the largest border disputes with China. Its dispute with China on the Line of Actual Control is a major detriment to stronger ties with China and has also resulted in immense trust deficit between the two nations.

Negative consequences of the dispute:

3) Ambiguous positioning of border has resulted in multiple disputes like Doklam and also a full scaled war in 1962.

New opportunities that can come up once a resolution is in place:
1) For a peaceful rise of Asian century both China and India are required to work in collaboration to push for the interets of the region.

2) Dispute resolution will be big push for the overall development of North East region – new economic opportunitites with China, regional stability, free from the nervous state of affairs/war, boost physical and digital connectivity
3) Positive spillover in India’s neighborhood can also be seen in the form of a well functional RCEP, RIC, BBIN, BIMSTEC grouping.

Border dispute is one of the reason between India-China animosity and is not the only reason for the rift. Structural issue like Chinese support to PAK terrorist proxies, Tibet issue, clarity of Arunachal Pradesh, conflict for strategic space still needs to be resolved.

The latest meeting of the special representatives to solve the border issue is a welcome step in this regard.

3. The diplomatic gains of isolating Pakistan in the global community are enormous and that would reap strategic dividends for India. Examine.

Finally the world countries have recognized the role of Pakistan in spreading terror around the world. With India’s growth and global outreach, we have been able to isolate them in global platforms and the gains from it are enormous to both India and world peace.

Issues with isolation of Pakistan:

Note: Explanations are required for all points. 8-10 points are enough. Give equal weightage to both part of answer.

Isolating Pakistan is a very good move and has enormous benefits to region and especially India but the problem which will arise because of this will be also enormous. There are also chances of problems outweighing benefits.  So a very careful strategy has to be worked out to deal with Pakistan in long term to create a terrorism free world.

Afghanistan was an ancient treasure where many civilizations flourished, it was cultural and traditional capital to the region and it was the route for many ancient empires to come and conquer India. Such a country is now in ruins because of terrorism and ideological battles.

How stable afghan is key to India’s Policy towards central Asian countries:

India is playing a key role in bringing stability in Pakistan especially after US decided to pull out troops. We have contributed in training its defence forces, building of parliament, Salma Dam and providing training in various capacities. It is high time western countries also come together to establish stability in the region.

Q.5 Connectivity is the most vital component of Indo-Bangladesh bilateral ties. Comment. Also discuss the ongoing initiatives on this front and their potential in ensuring better regional trade and investment.

Amongst its neighbours, India shares her longest border with Bangladesh. Furthermore, the geographic location of Bangladesh and the recent trends in Indian foreign policy make connectivity the central piece of India-Bangladesh bilateral ties.

Also, people to people connectivity is important to bring the nations together which share a common history and culture. Ongoing initiatives in this regard:

Robust regional connectivity, increasing bilateral cooperation and trade can further lay the foundation for resolving long standing issues such as the Teesta Water Sharing Agreement between the two countries.