Article 72 deals with power of president to grant pardons, etc., and to suspend, remit or commute sentences in certain cases

Article 161 deals with power of governor to grant pardons, etc., and to suspend, remit or commute sentences in certain cases

President can grant pardon, reprieve, respite and remission of punishment, or suspend, remit or commute the sentence of any person convicted of any offence:

The pardoning power of the President is independent of the Judiciary; it is an executive power. 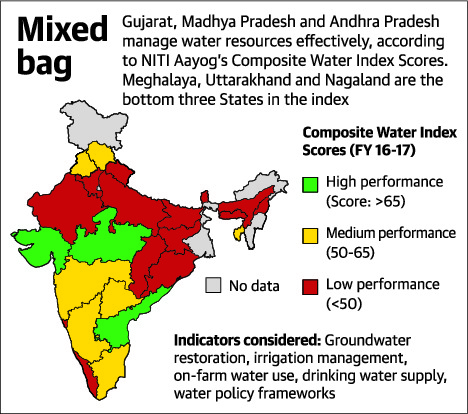 About Animal Welfare Board of India (AWBI)

Recently, AWBI has released a directive to all state departments that it is their responsibility to protect all strays – cattle, dogs and cats wandering on streets.

Animal welfare officers for each district will be appointed and they would have a critical role to play in ensuring that strays are not mistreated.

The AWBI does not have the right to prescribe punishments or fines for violations of the PCA Act but can pursue legal action.

Functions of The Animal Welfare Board of India

The WHO global air pollution database report that ranked 14 Indian cities among the 15 of the world’s most polluted, in terms of particulate matter (PM) 2.5 concentration.
Cities provide 60 per cent to 65 per cent of India’s GDP and 45 per cent to-50 per cent of our consumption. As per a World Economic Forum study, the number of million-plus urban conglomerates in India has increased from 35 in 2001 to 53 in 2011. By 2030, this number is expected to grow to 87.

Cities are often the primary avenue that allow people escape out of poverty, especially from traditional agriculture. The next two decades will only see an acceleration of migration into our cities.

Currently, the World Bank assesses health and welfare losses at 7.7 per cent of India’s GDP (PPP adjusted). If these costs are unchecked, they will grow sharply in the coming decades.
Hence, controlling urban pollution needs to be a key strategic objective for India.

As measured by PM 2.5 level is already about 40 per cent above the global safe limits across major Indian cities.

In a future with internal combustion engines (ICE) vehicles (even post BS VI roll out), urban pollution will continue to remain 25 per cent to 30 per cent above safe global standards because of the growth in automobiles.

It requires a multi-pronged approach. It needs to combine the already-proposed tighter emission norms (in form of BS VI), with a push for shared mobility and public transport and adoption of alternate mobility technologies.

Government policy will impact adoption that will affect both the extent and the future growth of urban pollution.

We need to assess and refine the monetary incentives that are offered to bridge the viability gap for electric vehicles for the purpose of containing urban pollution.

These include upfront subsidies, road/registration tax, reduced taxes, and interest rate subsidy.
Globally, incentives for adoption of alternate mobility technologies have been known to help — China grants a 45 per cent subsidy on vehicle purchases and Norway and Brazil have their own schemes.

Given their significance in an EV, India might need to consider pushing for battery localisation. Cell investments would need a long lead-time to materialise. Hence, the government needs to drive immediate investments by providing subsidies and tax breaks to local manufacturers along with support for research and development in the e-mobility domain.

Technology choices should be rewarded with exemption from tolls/taxes, special toll lanes and other preferred access to public infrastructure.

All these disincentives to traditional cars help in the push for electric vehicles.

There is an early need to standardise charging infrastructure/equipment to ensure interoperability and make it widespread.

India has witnessed saga of violence and conflicts.

Recent events in Thoothukudi (on May 22 and 23) have highlighted the changing nature of violence, and the inadequacy of existing rules and procedures to deal with new-era protests.

There is a need for redefining the internal security landscape as at present no one, the courts of judicature included, seems to understand the shifting taxonomy of violence.

Added to above list, are the escalating violence resulting from caste conflicts, such as –

All the above issues had resulted in highly complex violence (police firings, death of over a dozen individuals, etc) and need careful attention.

In instances of this kind, it is vital to try to determine the actual trigger that led to the violence.

In many conflicts, presence of ‘agent provocateurs’ or outsiders especially militant elements from outside, who are pre-programmed to create chaos, has led to more violence.

Examples of such incidents –

The conditions may be different, but the opposition remains equally intense. In both instances, we see organisations genuinely interested in the welfare of the locals initially launching the agitations, which gradually tend to be taken over by extreme right-wing and left-wing organisations. The result remains the same: widespread disruption.

Protests today are beginning to embrace entire communities. Governments and even tribunals are today viewed by protesters with deep suspicion, limiting opportunities for adjudication. Contrary judgments at different times by the High Courts and the Supreme Court have hardly helped.

This is a phenomenon seen in other protest movements elsewhere as well. In other words, this is the age of ‘high voltage’ revolt, basically an expression of repressed anger.

Much of this arises from an “embedded wisdom” that the system is being “manipulated” in favour of the rich, the powerful, and the big multinationals. This is something that is not confined to India alone.

Authorities need to understand the metastasising nature of the protests and signs of the growing revolt of an ‘underclass’ against the so-called ‘elite’. The police also do not seem to have taken into consideration the kind of impetus provided to agitational methodologies by the ‘digital wave’. Unfortunately, the authorities tend to be look at current agitations through simple equations. They remain prisoners to Newton’s Third Law. Outdated ideas can no longer explain the complex nature of today’s agitations.

There is an urgent need for changes in in administrative policies and police methodologies. The latter consequently find themselves severely handicapped in handling agitations, especially those agitations sponsored by today’s newest ‘elite’, viz. the middle class.

Erection of barricades and promulgation of Section 144, have little relevance in the circumstances prevailing today.

Police effectiveness is also hampered on account of several other reasons, including that they are often outnumbered by mobilised crowds, driven by indignation and rage, predisposed towards creating disorder.

The police on their part need to realise that existing laws and procedures notwithstanding, merely putting faith and focus on strength is not likely to succeed. It ignores the asymmetrical measures available to today’s mobs, and the limits that these impose on tactics and policies of a bygone era.

Simply blaming the police is no answer to the growing volumes of protests everywhere.

Which of the above statement[s] is/are incorrect?

Q.2) With regard to pardoning power of the President, which of statements given below is incorrect?

Select the correct answer using the codes given below

The changing nature of violence

Is it advantage wireless tech again?