The Centre’s model-village scheme will now include 12 welfare flagship programmes and has been extended to more villages. [therefore the name – Extended Gram Swaraj Abhiyan (EGSA)]

Alternative cereals can improve water use and nutrient supply in India

Part of: GS Prelims and Mains III – Agriculture and irrigation; Environment and Conservation of biodiversity

Key pointers: (according to a study)

Article link:‘Alternative cereals can save water’

From previous articles, we already know that – 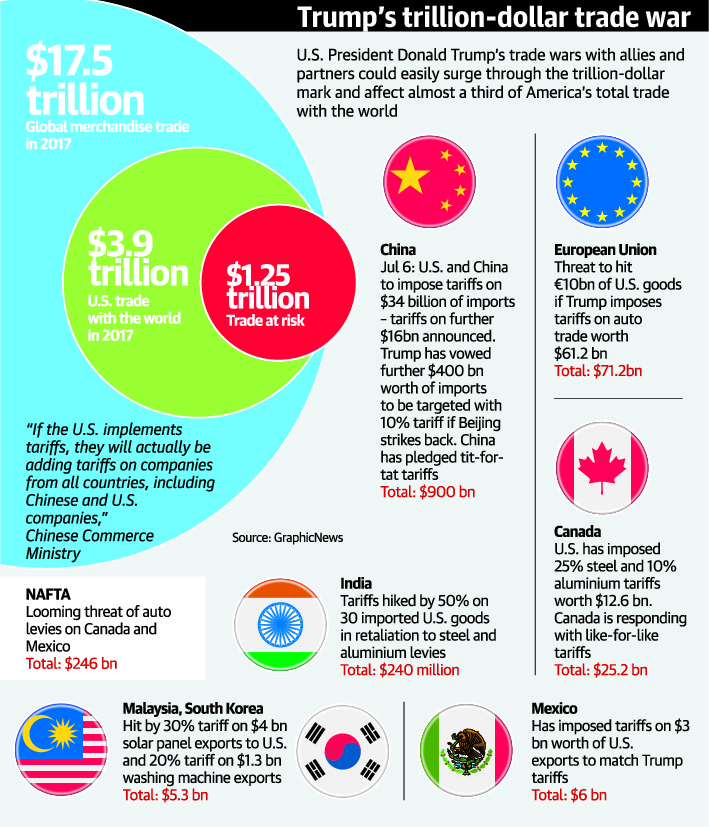 Assessment: Why US (Trump administration) is launching its trade wars?

Since the start of the year, U.S. President Donald Trump has lashed out at allies and adversaries alike on trade.

Often, as with India, the U.S. has pushed for enhanced security cooperation at the same time it declared trade relations a national security threat.

There are at least three possible explanations for trade wars launched by Trump administration:

Among the above three options, the best possibility point to the last one – simple protectionism. (Because of below reasons)

Global trading system such as General Agreement on Tariffs and Trade and World Trade Organization were never designed to block a major world power from running amok. They relied on the principal players in global trade respecting the system.

The WTO Dispute Settlement Mechanism has failed to act quickly to address the mounting spats about trade protectionism emanating from the U.S. – a major reason why countries around the world have not waited for verdicts from their WTO complaints and have instead proceeded with retaliation.

Even as a brave new India forges ahead with smartphones and cities, caste remains a major force shaping social relations and politics.

Over the last few years, crimes against Dalits have been on the rise.  Even in 2018, Indian society doesn’t seem to have moved on from caste-based oppression and violence.

Recent incidents of violence against Dalits

Concerns: Perpetrators of violence against members of oppressed groups document their act themselves, apparently to establish their brazenness. They intended to warn others against transgressing traditionally-maintained boundaries of upper caste authority.

They don’t believe that history has moved on, towards new social norms. There is something in the current political ethos that persuades them to hope for a return to old times.

The episode reminds us of the role that wells used to play in India’s social life before the advent of piped water. Wells were often demarcated as caste territories. To have a well of your own, in your courtyard, was a symbol of status.

Education in most states does precious little to deal with caste issues in any depth or detail. Indeed, caste remains a curricular taboo. It is not supposed to be discussed directly. Nor is it acknowledged as a major social institution, shaping relationships as important as marriage.

Schools, colleges and other educational institutions desist from engaging with caste in the false hope that education will remove the social inequality.

From friendships to politics, the influence of caste can be observed everywhere. Many young people feel undisturbed by it. The rhetoric of being fair, open and unprejudiced is well-established in colleges, but no real learning about caste-based practices takes place.

The belief persists that including the caste system in the curriculum will only reinforce it. Many schools and colleges are established by caste associations, and they too prefer to let the magic of caste remain subtle, percolating into the young mind quietly.

B R Ambedkar was right in seeing caste as a barrier to India’s intellectual growth, apart from being the lever of oppression.

Q.1) With respect to Article 239AA of Constitution Delhi assembly can legislate on all those matters listed in the State List and Concurrent List as are applicable to union territories, excluding which of the following?

Q.2) In what regard the Centre have special relationship with respect to NCT of Delhi as compared to other states?

Q.3) Which among the following cereals are covered under MSP?

Q.4) Government of India has declared the year 2018 as the National year of Millets. Which of the following statements regarding Millets are correct?

Q.5) With regard to Gram Swaraj Abhiyan, Consider the following statements:

A political ploy: on the hike in MSPs

The Indian wunderkind: on Praggnanandhaa’s success and the Indian chess wave

Betting on the future