In News: India and Pakistan are holding crucial talks over various aspects of the Indus Waters Treaty. This is the first engagement between the two nations since Pakistan Prime Minister Imran Khan took office.

Indus Waters Treaty (IWT) – Signed by India and Pakistan in 1960

Under the treaty, India has full use of the three “eastern” rivers (Beas, Ravi, Sutlej), while Pakistan has control over the three “western” rivers (Indus, Chenab, Jhelum), although India is given rights to use these partially as well for certain purposes.

1990s: A difference arose about the Baglihar Dam being built by India on the Chenab. Pakistan claimed that low gates installed for flushing sediments violated the specifications of the treaty and endangered Pakistan’s water security because it gave India a capacity to manipulate the timing of flows into Pakistan.

2010: Pakistan took a new case, that of the Kishenganga hydro-electric project on the Jhelum river, to the International Court of Arbitration. On December 20, 2013, the court issued its final judgment which comprised of two elements —

Climate change-induced glacier melting in the Himalayas threatens future water supply in the Indus basin. There is increasing global warming, but the rise in temperature in the Himalayas has been much higher than the global average. Thus, harnessing the Indus river system sustainably is a crucial issue for improving human development and contributing to regional peace and security in South Asia.

While India and Pakistan remain the largest stakeholders due to the size and volume of the waters and vis-à-vis their usage, Afghanistan (a small area due to Kabul river) and China – as Indus and Sutlej originate in Tibet – too are part of the basin. The river system in the basin includes: Ravi, Beas, Sutlej, Swat, Chitral, Gilgit, Hunza, Shigar, Shyok, Indus, Shingo, Astor, Jhelum, Chenab and Kabul.

The Indus Basin epitomises a grand challenge due to its high poverty rates, high groundwater extraction, increased environmental degradation and risk of floods and droughts due to climate change.

India needs to take the opportunity to work for a comprehensive and integrated form of basin management, the benefit sharing of the Indus river system will not be limited only to water resources; it can have other peace-enhancing effects and significantly contribute to regional peace, security and development.

Refer below: Map for practice 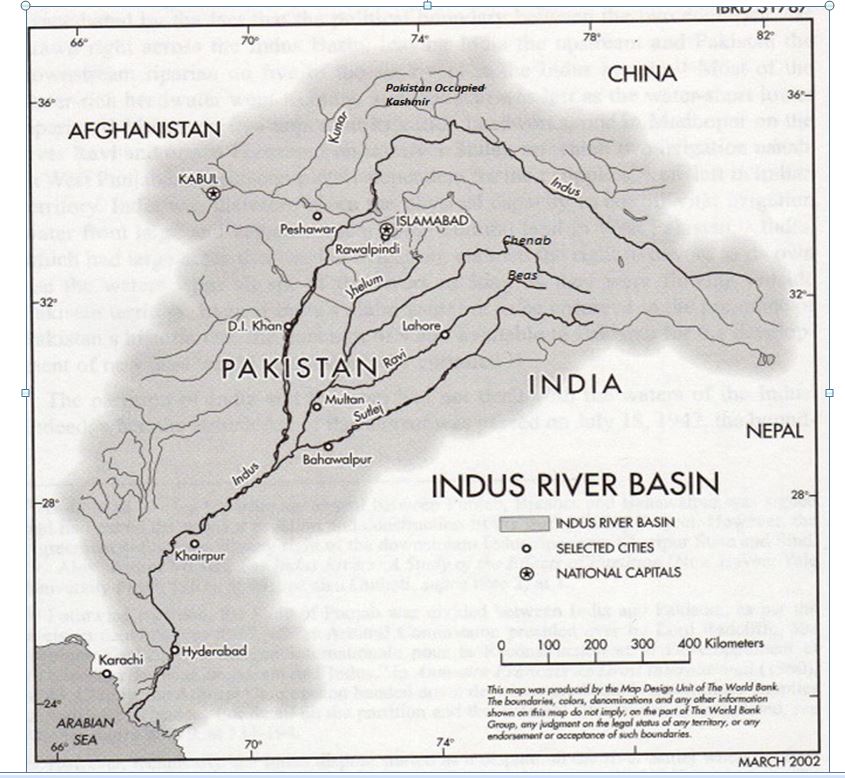