Sports is an extremely important component for the overall development of our nation. India, in the last few years has made steady progress in the field of sports. This tremendous potential needs to be showcased at a global platform. It’s time we inspire young talent, give them top-notch infrastructure and training of the highest level. We need to inculcate a strong spirit of participation in sports that enables players to demonstrate their true potential. Only then can India realise its dream of becoming a sports super power.

Resources have never been a problem for India, how it was spent is surely a problem.

Britain, a country that lags behind India both in population and GDP, finished second in the games with 67 medals. The nation spent ₹2,437 crores over 20 sports disciplines between 2013-17. In the same period of time, the Indian government spent only ₹740 crores over as many as 67 national sports disciplines. For another comparison, the United States’ University of South California spends just over ₹640 crores per annum towards sports. Moreover, the 67 disciplines also included non-Olympic sports like cricket, golf, ball-badminton, and tug-of-war.

India needs to not only revamp its spend on sports but also the way in which it was spent.

The Khelo India programme has been introduced to revive the sports culture in India at the grass-root level by building a strong framework for all sports played in our country and establish India as a great sporting nation.

Khelo India Scheme aimed at providing an annual scholarship of ₹ 500,000 each for eight years to 1,000 selected athletes. For the first two years between 2017-18 and 2019-20, the program cost the government a total sum of ₹1,756 crores. The government also promised to promote 20 universities across India as hubs for sporting excellence. The bill was unanimously passed in the Union Cabinet.

Vision: To infuse sports culture and achieve sporting excellence in the country

Mission: Revamped scheme is to encourage sports for all thus allowing the population across gender and all age groups to harness the power of sports through its cross-cutting influence, namely, holistic development of children & youth, community development, social integration, gender equality, healthy lifestyle, national pride and economic opportunities related to sports development. Also, the scheme aims at addressing a bigger problem, that of optimal use of resources. 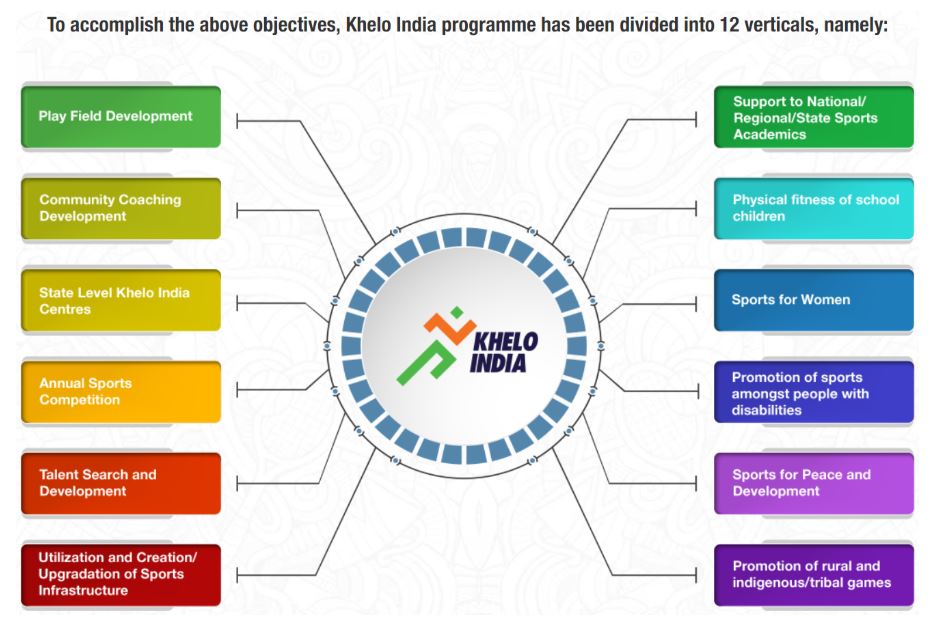 Khelo India Games: The Khelo India Games has been introduced to revive the sports culture in India at the grass-root level. The aim is to build a strong framework for all the Indian sports as well as establishing India as a great sporting nation.

One of the 12 objectives illustrated above, Khelo India Games programme is aimed at identifying talented players in priority sports disciplines at different levels by a high-powered committee. These young athletes would then be provided annual financial assistance of ₹5 lakh per annum each. The duration of this scholarship would be 8 years.