Part of: GS Prelims and Mains II – India and its neighbourhood- relations; India and Pakistan relations

Therefore, the protest brings back focus on the precarious arrangement of the administration in the Union territories of Puducherry and Delhi.

The two entities have elected Assemblies and seem to function like state governments. But in reality, these Union territories are administered by the Centre through lieutenant governors, who have veto powers over the elected chief ministers.

The main conflict is the question –

If an Assembly cannot enforce its laws, the very idea of an elected democratic government loses its legitimacy.

Government of Union Territories Act, 1963 allows the L-G office discretionary powers, but these must be exercised judiciously and only in exceptional circumstances.

This scheme, which gives a clear edge to the Centre, can work only if there is harmony between the Council and the L-G. 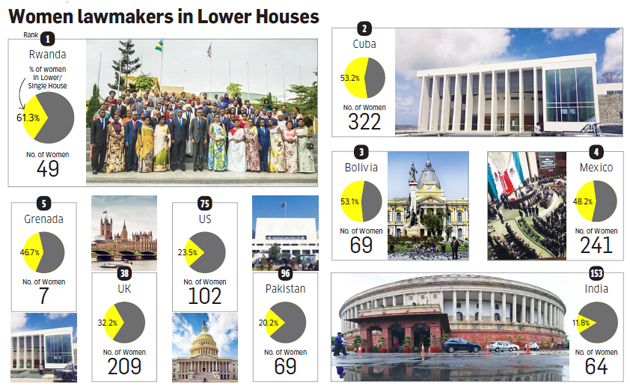 Solutions to increase the number of women parliamentarians

The 73rd and 74th amendments to the Indian Constitution reserve one-third of local body seats for women.

However, reservation for one-third of the seats for women in the Lok Sabha has been tabled as a bill several times until as recently as 2008. Each time the bill has lapsed.

India should have an Election Commission-led effort to encourage reservation for women in political parties.

Reservation in political parties will also require education, encouragement, and role-modelling for women to aspire to a political role as it is in the party’s interest to ensure that their candidate wins.

India has had a long-serving woman prime minister and several women chief ministers and speakers of the House. Yet its record of women parliamentarians is woefully poor. For a balanced future for the country, this trend needs to be changed.

Q.3) Consider the below statements about Union Territories in India:

Q.4) In what regard the Centre have special relationship with respect to NCT of Delhi as compared to other states?

Q.5) An administrator of a union territory is

Not without an explanation: when judges recuse themselves

Why socialism is gaining traction among millennials?

From plate to plough: A race to atone for neglect of the farmer