In News: A variety of potatoes developed by FMCG giant Pepsico’s India division has triggered a patent-infringement battle in the country.

The snacks and beverages major has sued a few farmers in Gujarat for growing potatoes which the company uses to make its Lay’s chips.

PepsiCo has been developing and registering a variety of potatoes in India since the production of Lay’s took a hit in 2008. The overall supply of potatoes was hit that year due to crop failure in the states of Maharashtra, Karnataka, and Punjab. The company currently works with 24,000 farmers across the country in states like West Bengal, Maharashtra, Punjab, Gujarat, Uttar Pradesh, Karnataka, Bihar, Haryana, and Chhattisgarh.

The patent is for the potato plant variety FL-2027 (commercial name FC-5). Pepsi’s North America subsidiary Frito-Lay has the patent until October 2023. For India, PIH has patented FC-5 until January 2031 under the Protection of Plant Varieties and Farmers’ Rights (PPV&FR) Act, 2001.

PIH, which has a buyback agreement with Gujarat farmers, accused the 11 farmers — three of whom earlier had contracts with the company — of illegally growing, producing and selling the variety “without permission of PIH”.

One of the accused farmers had said the agreement was that PIH would collect potatoes of diameter greater than 45 mm, and that farmers had been storing smaller potatoes for sowing next year. Four other farmers, who were slapped with Rs 1.05 crore lawsuits, said they got registered seeds from known groups and farmer communities and had been sowing these for the last four years or so, and had no contractual agreement with anyone. They said they learnt they were growing a registered variety only when they got a court notice on April 11. 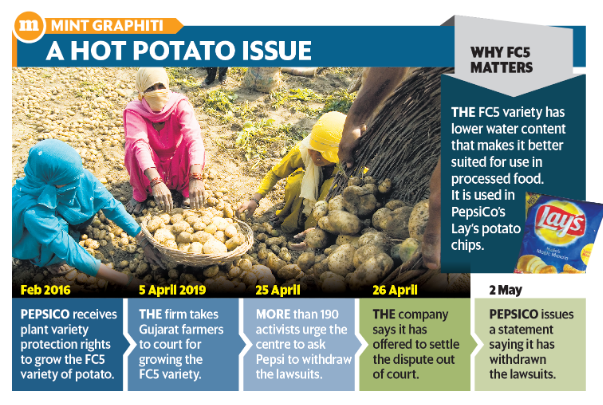 In the days that followed the lawsuits, activists, farmer unions and other organisations cited Section 39(1)(iv) of the PPV&FR Act in defence of the farmers. The section states: “Notwithstanding Anything contained in this Act — a farmer shall be deemed to be entitled to save, use, sow, resow, exchange, share or sell his farm produce including seed of a variety protected under this Act in the same manner as he was entitled before the coming into the force of this Act, provided that the farmer shall not be entitled to sell branded seed of a variety protected under this Act.”

Organisations said the Act was tailored to give farmers free access to seeds.

On Wednesday, the Gujarat government reportedly held out-of-court settlement talks with the company, which eventually announced the withdrawal of cases. It has withdrawn six cases against nine of the farmers, and its officials will meet state government authorities Friday to discuss an arrangement.

The corporate giant’s offer had two terms. One, farmers should stop growing the registered potato variety and surrender their existing stocks. And if they wished to continue, they must enter PepsiCo’s collaborative farming programme where they buy seeds from the company and sell the produce back to it.

PepsiCo may be concerned about competitors using its patented potato variety, but targeting the weakest element in the chain, the small farmer, may not be the best remedy.