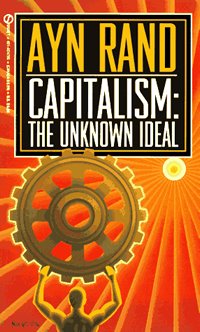 There has never been a bigger proponent of capitalism in the 20th century than Ayn Rand. She almost has been recognized as a messiah who came down from some unknown corner of the world to America to save its greatest possession – The free market and capitalism.

Never before has anybody, let alone a woman has so passionately spoken in favor of capitalism. She not only advocates the benefits of capitalism, she recognizes it as the only moral way of living – freedom to create and produce what is valuable to people and make your own fortune and future.

The idea of capitalism has always been criticized by people who have looked at it like some kind of evil endeavor. A lot of people still think that an organization’s motive to make profit is not humane or philanthropic, forgetting that it was capitalism that was responsible for the long period of peace in human history.

Capitalism is a must read for all those who are interested in understanding the forces that drive the world. Capitalism is not just an idea, it is a moral way of living, it is the most human way of living as it offers individuals the freedom to create their own lives. Ayn Rand absolutely abhors any form of dictatorship and statism.

She believes that the greatest evil in the world that has led to almost all the wars in history has been some form of dictatorship. Her opinion in plain and simple words is the resurrection of capitalism. Read this book and re-discover the virtue of capitalism.