Syria Crisis – US Backs out

In News: US President Donald Trump has casted his decision to abandon Kurdish fighters in Syria as fulfilling a campaign promise to withdraw from “endless war” in the Middle East, even as Republican critics and others said he was sacrificing a US ally and undermining American credibility.  Trump declared US troops would step aside for an expected Turkish attack on the Kurds, who have fought alongside Americans for years, but he then threatened to destroy Turkey’s economy if they went too far. 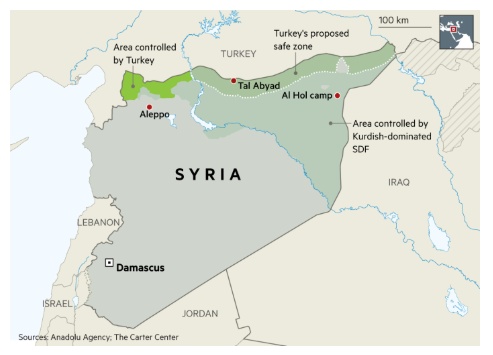 What is exactly happening?

Turkey has long wanted to move across the border into northern Syria, where it sees the Syrian Kurdish forces (specifically the People’s Protection Unit, or YPG, which forms the bulk of the Syrian Democratic Forces) as tied to to the Kurdistan Workers’ Party (PKK), separatists that Turkey considers a terrorist group. The PKK has waged an insurgency against Turkey for decades, and it’s allied with the Syrian Kurdish forces across the border — which has long put Turkey on edge.

Turkey has two main goals in northeast Syria: to drive the Kurdish YPG militia which it deems a security threat away from its border, and to create a space inside Syria where 2 million Syria refugees currently hosted in Turkey can be settled.

An economic downturn in Turkey is increasing domestic pressure on Erdogan to resettle 2 million of the 3.6 million people the country has taken in. But the Kurds that Turkey sees as a threat are Washington’s most critical partner on the ground in Syria. Kurdish fighters fought on the front lines against ISIS; they’ve received backing for years, including US technical and intelligence assistance and air support.

This put the US in an awkward position from the start — between a NATO ally in Turkey on the one hand and its most reliable partners in fighting (and detaining) the Islamic State on the other.

So what was the step taken?

In response, in August, the US and Turkey agreed to a security mechanism designed to ease tensions between Turkey and the Syrian Kurds. In Starting in September, the US and Turkey began running joint patrols and the US helped push back some Syrian Kurdish forces from the Turkish border, including destroying their fortifications, to help create a smaller buffer zone in Syria. Basically, it was establishing a “safe zone” step by step, and without the potential violence that a Turkish invasion would unleash. The Pentagon promoted these efforts.

But Erdogan had evidently started to get a bit impatient with this approach. The Turkish president apparently found a sympathetic partner in Trump, who’s notoriously skeptical of US troop commitments overseas and may have his own domestic political reasons for doubling down on a promise to end America’s entanglements abroad

Implications of the US deciding to pull out of Syria: A new conflict, shifting alliances, and a possible ISIS resurgence

This directive — which apparently blindsided allies and lawmakers and national security officials alike — leaves the American-backed Syrian Democratic Forces (SDF), largely made up of Kurdish civilians and Kurdish troops who led the fight against ISIS on the ground in Syria, at the mercy of Turkish forces. In doing so, the US is jeopardizing its partners on the ground and unleashing unpredictable consequences for Syria, now in its eighth year of war.

For many, Monday’s announcement looks a bit like a repeat of what happened in December 2018, when Trump abruptly announced he was pulling all troops out of Syria over the objections of the Pentagon, including his then-Secretary of Defense Jim Mattis, who ultimately resigned over the decision. Trump, in that instance, partially walked back his pronouncement, leaving a troop contingent in the country, in part because of Turkey’s threat to the Kurds across the border.