In News: Prime Minister Boris Johnson’s brutal battle with lawmakers over Britain’s plan to leave the European Union has led the country into uncharted waters. Along the way, the U.K.’s highest court overturned Johnson’s suspension of Parliament, political norms are being tested and even the Queen has been dragged in. There are more fights ahead over where power resides and how it may be exercised in a country governed by a mass of unwritten rules heaped up over centuries.

Britain has an uncodified constitution, meaning it is largely upheld through convention and precedent. The constitution has changed dramatically down the centuries, with monarchs steadily surrendering their once-vast powers to the government and prime minister of the day. Johnson required Queen Elizabeth’s formal consent to suspend parliament but she was equally required, by custom, to grant it.

But there definitely exists – 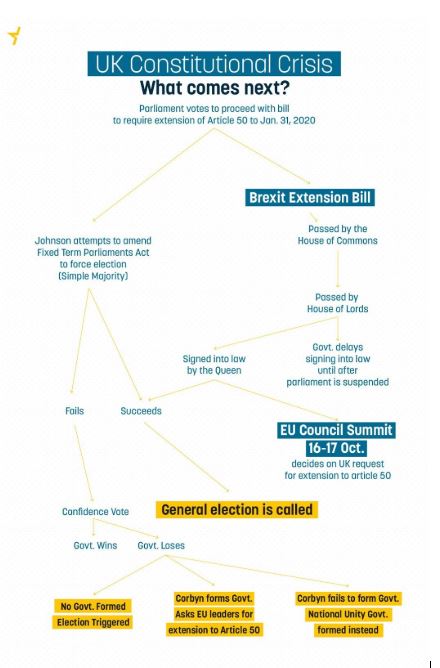 Where does this leave Brexit?

If the U.K. and EU don’t reach a negotiated transition agreement by Oct. 19, Parliament has required Johnson to seek an extension, likely until Jan. 31, 2020. That demand is part of a law sponsored by Labour Party grandee Hilary Benn that was passed on Sept. 9. The prime minister has promised to continue negotiating with Brussels, but has also said he’d prefer to be “dead in a ditch” than to ask for more time. Members of Parliament are worried he may try to exploit loopholes to evade the Benn Act, which has been described by some legal experts as “not watertight.” Such a move, if the government attempted it, would set up further legal battles over the power of the prime minister to evade the will of Parliament.

Why the UK needs a written constitution?

Today, the UK constitution is still a piecemeal collection of conventions and common law open to misuse and abuse. The current crisis demands that we put this right and agree a written constitution that clarifies beyond doubt the separation of legislative, judicial and executive powers and the role, if any, of the monarchy. This would be hugely preferable to the current situation, which requires expensive judicial reviews to decipher the blurring of legal and political power.

However a written constitution won’t be a panacea. It will need to be a living document with the flexibility to be interpreted as the world changes. Recent debates on gun control in the US and the right to self-determination in Catalonia demonstrate that constitutions can also be barriers to change if they do not allow for contemporary amendments.

1215: MAGNA CARTA – Issued in June 1215, the Magna Carta was the first document to establish the principle that the monarch was not above the law and to place limits on royal power.