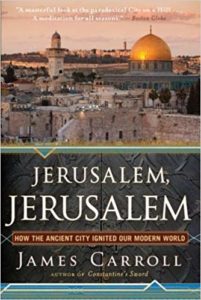 Perhaps, there is no other place in history that is as steeped in religious, political and historical significance as Jerusalem. Considered as the birth place of three of the world’s largest Abrahamic religions, Judaism, Islam and Christianity, Jerusalem and its history, in some ways, is the history of the world’s greatest religions.

James Carroll illuminates the complex past of Jerusalem as a city, spiritual and religious destination, and a political conflict zone for generations. This book is thorough and filled with immaculate details about some of the most important events in world history.

The core conflict between the three monotheistic religions, Judaism, Islam and Christianity has its common roots in the history of Jerusalem. This book helps one to understand the primary reason for conflict, the splitting up of the religions and the spiritual and political motivations behind them.

Jerusalem is steeped in mystery and shrouded in conflicting stories and ideologies. James Carroll does a stupendous job of unraveling the mystery of this place layer by layer. If one is interested in knowing more about the origin of conflict in religions, situations and circumstances responsible for the conflict, one has to read Jerusalem.