(Topic: Functioning of the Parliament)

Frequent disruptions, Points of Order without a point, Adjournment Motions and interruptions betray political immaturity, exhibitionism, excessive fondness for the limelight and inadequate appreciation of the need to utilise the opportunity of serving the public interest.

Government of India is committed to ensuring high quality healthcare, accessible to all upto the last mile. The digital health interventions are accelerating this transformation and have a huge potential for supporting Universal Health care.

The need of the hour is to create an ecosystem which can integrate theexisting disparate health information systems and show clear path for upcoming programmes. There is a need to ensure convergence across these IT systems to monitor and provide health services in a robust and efficient manner.

Ministry of Health and Family Welfare has initiated efforts in the direction of a comprehensive, nationwide integrated e-Health system under National Digital Health Blueprint. NDHB will help in providing a common platform for integration of existing applications in health domain and data which has existed in silos, either in public health facility, or, in private healthcare facility, in India.

It was also updated that building on the initial document of “National Health Stack” (NHS) by NitiAayog, Ministry of Health and Family Welfare has defined clear timelines, targets and the resources required for this digital convergence of Healthcare programmes in India.

SCO: Formerly the Sanghai Five and formed in 1996, the SCO has eight members today including India and Pakistan, which became part of it in 2017.

Since its formation, the SCO has focused on regional non-traditional security, with counter-terrorism as a priority: The fight against the “three evils” of terrorism, separatism and extremism has become its mantra. Today, areas of cooperation include themes such as economics and culture.

How does membership of the SCO help India?

In a world riven by geopolitical contestations, SCO membership provides India a vital counter to some of the other groupings it is a part of, balancing out its stated policy of pursuing “multi-alignments”. It is a platform also for alignments on issues such as energy security, connectivity and trade. With India indicating that it sees little use for SAARC, the SCO provides the only multilateral platform for it to deal in close proximity with Pakistan and Afghanistan.

For India, two important objectives are counter-terrorism and connectivity. These sit well with the SCO’s main objective of working cooperatively against the “three evils”.

The Forum took note of the ongoing cooperation under the following four sub-groups:

The Forum also finalized the roadmap for future collaboration between the two countries which, inter-alia, include Flexibilisation of existing coal fired power plants, promoting niche markets for Solar Energy, promotion of energy efficiency in buildings through ECBC, building materials and credit lines for financing corresponding measures and RE evacuation through state-of-the-art intra-state and inter-state transmission grid infrastructure.

ATITHI: Easy to use mobile app for international travelers to file the Customs declaration in advance

UCCN, created in 2004, is a network of cities which are thriving, active centres of cultural activities in their respective countries. The UNESCO Creative Cities Network now counts a total of 246 cities.

The member cities that form part of the Network come from all continents and regions with different income levels and populations. They work together towards a common mission: placing creativity and the creative economy at the core of their urban development plans to make cities safe, resilient, inclusive and sustainable, in line with the United Nations 2030 Agenda for Sustainable Development.

The 7 categories for recognition under UCCN are as follows-

Previously, 3 Indian cities were recognized as members of UCCN, namely-

Ministry of Culture is the nodal Ministry of Government of India for all matters in UNESCO relating to culture.

India International Science Festival – IISF, organized jointly by Science & Technology -related Ministries and Departments of the Government of India and Vijnana Bharati (Vibha), is an annual festival to celebrate the achievements of India’s scientific and technological advancements with students, innovators, craftsmen, farmers, scientists and technocrats from India and abroad.

India’s first global Mega Science Exhibition: ‘Vigyan Samagam’ in Kolkata; The Exhibition will highlight India’s contribution to the world’s science, technology and innovation, and researches in the areas of high energy physics, nuclear physics, astronomy and astrophysics, nuclear energy etc. It will also showcase that DAE not only works on nuclear technologies, but also works on fundamental science and research; and the wide-ranging connectivity of DST across institutional and disciplinary barriers across the country.

The Kung Fu Nuns of the Drukpa Order: Some of the Himalayas’ most prominent human rights advocates, recently received the Asia Society’s prestigious Game Changer Award in New York on 30th October 2019 for their path-breaking work to empower women and dismantle gender stereotypes in the Himalayas.

There is a need to give a strong thrust to research activities and innovation in the areas of ocean energy, marine biology and bio technology for India to become a leader in those sectors.

India’s exports of marine products to China has tripled and touched almost USD 800 million, in the first nine months of 2019, as per the data released by China’s customs authority recently. India’s marine exports are expected to cross USD 1 billion mark by the end of this year. Embassy of India has been promoting various products such as Indian grapes, sugar, rice, pharmaceuticals, tea, oil meals, IT and ITeS in which India has proven global strength but little market share in China.

Maps of newly formed Union Territories of Jammu Kashmir and Ladakh, with the map of India Released 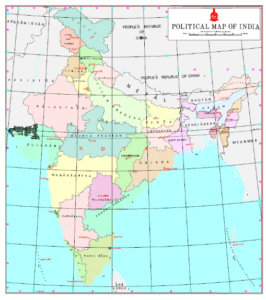 The birthday of India`s Iron Man is being observed as Rashtriya Ekta Diwas or National Unity Day since the year 2014.

Acknowledging the monumental contribution of Patel in nation building, Jawaharlal Nehru said, “History will call him the builder and consolidator of new India.”

The remarks Patel made during the Quit India Movement are also relevant today. He said: “We have to shed mutual bickering, shed the difference of being high or low and develop the sense of equality and banish untouchability. We have to live like the children of the same father”.