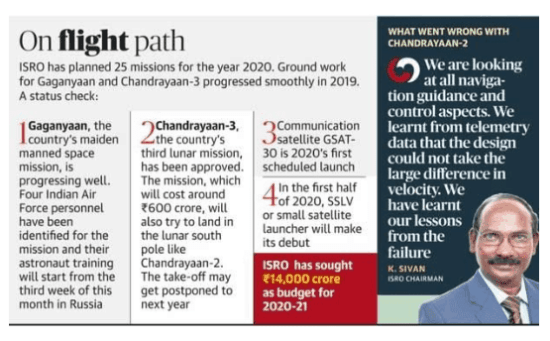 A manned space mission is very different from all other missions that ISRO has so far completed. In terms of complexity and ambition, even the missions to the Moon (Chandrayaan) and Mars (Mangalyaan) are nowhere in comparison.

For a manned mission, the key distinguishing capabilities that ISRO has had to develop –

The spacecraft carrying human beings, called crew module, is likely to weigh in excess of 5 to 6 tonnes. ISRO’s main launch vehicle, the PSLV (Polar Satellite Launch Vehicle), which carried the Chandrayaan and Mangalyaan missions too, can carry payloads that are barely up to 2 tonnes, and that too only to orbits at about 600 km altitude from the Earth’s surface. That is why the development of GSLV Mk-III, a launch vehicle with capabilities to deliver much heavier payloads much deeper into space, was necessary.

The satellites launched by ISRO including Chandrayaan and Mangalyaan, normally meant to remain in space, even when their life is over. Any manned spacecraft, however, needs to come back. This involves mastering of the highly complicated and dangerous re-entry and recovery ability.

This is a crucial safety technology, involving an emergency escape mechanism for the astronauts in case of a faulty launch.The mechanism ensures the crew module gets an advance warning of anything going wrong with the rocket, and pulls it away to a safe distance, after which it can be landed either on sea or on land with the help of attached parachutes.

Recently, ISRO completed the first successful flight of the crew escape system. A simulated crew module weighing about 3.5 tonnes was launched from Sriharikota.

The Environmental Control & Life Support System (ECLSS) is meant to ensure that conditions inside the crew module are suitable for humans to live comfortably.

While the design and configuration of the ECLSS and the inside of the crew module has been finalised, other components and systems are in the process of being tested. Ground testing will have to be followed by tests in the space orbit while simulating zero gravity and deep vacuum.

The Indian Space Research Organisation (ISRO) has announced that it aims to launch its own satellite pair for space communication purposes, called Indian Data Relay Satellite System (IDRSS). It will be pivotal in helping  ISRO’s ground control room to uniformly monitor the space crew and communicate with them at any given point of time, and can be used in both low orbit missions and farther missions such as those to the moon, Mars and beyond.

Conclusion: These developments will help ISRO in perfecting the cryogenic technology for sending up heavier and heavier payloads and will reduce India’s dependency on other countries to launch heavier satellites.