A volcano is an opening in the Earth’s crust that allows molten rock, gases, and debris to escape to the surface. Volcanism is the phenomenon of eruption of molten rock (magma) onto the surface of the Earth or a solid-surface planet or moon, where lava, pyroclastics and volcanic gases erupt through a break in the surface called a vent.

Movement of molten rock in the mantle, caused by thermal convection currents, coupled with gravitational effects of changes on the earth’s surface (erosion, deposition, even asteroid impact and patterns of post-glacial rebound) drive plate tectonic motion and ultimately volcanism.

Volcanoes tend to exist along the edges between tectonic plates, massive rock slabs that make up Earth’s surface. About 90 percent of all volcanoes exist within the Ring of Fire along the edges of the Pacific Ocean. 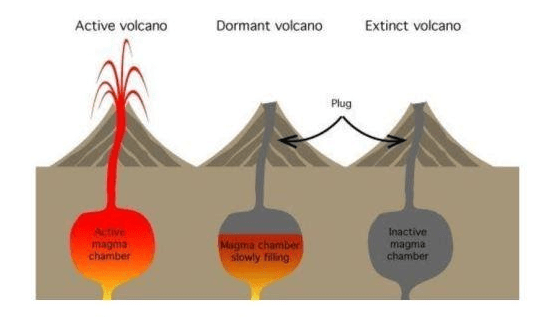 Factors that lead to volcanism:

The gases and dust particles thrown into the atmosphere during volcanic eruptions have effects on climate.

Volcanic eruptions produce hazardous effects for the environment and climate

Unlike other natural disasters such as floods, wildfires and earthquakes, volcanoes can have some positive effects.

Craters: Crater is a bowl-shaped depression at the top of a volcano caused by past volcanic eruptions. A volcanic crater is relatively small, usually spanning about a half a mile in diameter or less, and can fill with water to form a crater lake.

Caldera: If a volcanic eruption causes the magma chamber to empty, the volcano can implode, forming a larger depression known as a caldera. eg. Yellostone caldera.

Volcanic domes: Volcanic Domes result from the extrusion of highly viscous, gas poor andesitic and rhyolitic lava. Since the viscosity is so high, the lava does not flow away from the vent, but instead piles up over the vent.

Dykes – When magma solidifies in vertical fissures. Eg. Many Scottish Islands, such as Mull and Skye

Batholiths – Magma that cools in the deeper depth & develop in the form of large domes. Eg. Sierra Nevada Batholith, California

Laccoliths – These are large dome shaped intrusive bodies having a pipe like conduit from below. Eg. Eildon Hills on the Scottish Borders

There are five active volcanoes in Hawaii. They are:

Mauna Loa is an active volcano and is due for an eruption.

India’s only active volcanoe is located in Barren island of Andaman, which is also the only confirmed active volcano in South Asia.