In News: February 26th marks the first anniversary of the Balakot airstrike which was conducted by the Indian Air Force to target the terrorist camps operating in the town of Balakot in the Khyber-Pakhtunkhwa province of Pakistan.

Forty CPRF Jawans lost their lives in the attack when an ED-laden SUV rammed into their convoy. The terrorist organisation Jaish-e-Mohammad claimed responsibility for the suicide bombing. The Balakot airstrikes were seen as a direct response to the Pulwama bombing. 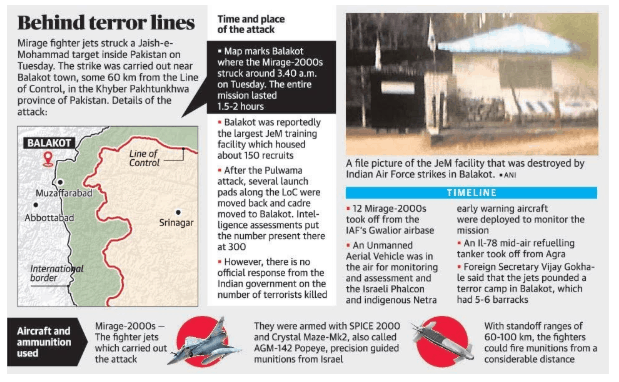 The biggest lesson of the air skirmish, in which Wing Commander Abhinandan Varthaman’s aircraft was shot down across the border, was the lack of an edge over the US supplied AMRAAM beyond visual range missiles that are in service with the Pakistani air force.

The engagement range of the AIM 120 AMRAAM, fired from F 16s with the Pakistani air force, forced Indian fighters to take evasive manoeuvres on February 27 last year at the LoC skirmish. The Indian Su 30 MKI and Mirage 2000 fighters that had been scrambled to take on the enemy fighters could not get a firing solution on F 16s as both their radars and weapons were out ranged by the American supplied missiles.

It was only Wing Commander Abhinandan who could fire away the close range R 73 missile as he managed to sneak in close to the enemy fighter formation after taking off from Srinagar. This key capability is still missing, though the arrival of the Rafale jets armed with Meteor air-to-air missiles will change the equation.

Solution: 2 Su 30MKIs against one F 16 for an assured kill – because of better radar and weapon on the F 16. When the Rafale comes in, one fighter jet would be adequate to go up against two F 16s, reversing the ratio

The induction of the Rafales, the large AWACS and the S 400 air defence system (first units expected next year) will give the air force an edge in range—where it will no longer need to cross the border to inflict punishing damage to terror infrastructure anywhere in Pakistan and will be able to defeat with ease any retaliatory action planned.

Reflections and Message to the World

Balakot reflected India’s approach against the employment of terrorism as a low-cost option against India.

India has joined the list of countries along with the United States and Israel who can strike in enemy territory and avenge the death of its soldiers. It sent out a signal to adversaries that India’s response to provocation will no longer be ‘soft’ and only diplomatic. All options were on the table.

In the long term, building strong counter-terror defences, partnering with its own citizens to gather intelligence, and creating deterrents will be key.