1. Discuss the physiographic features of shields and cratons. How do they get formed? Discuss.

A craton is an old and stable part of the continental lithosphere, which consists of Earth’s two topmost layers, the crust and the uppermost mantle. A shield is a large area of exposed Precambrian crystalline igneous and high-grade metamorphic rocks that form tectonically stable areas.

Thus Craton comprising shields both form major geological features of earth. They help in understanding the process of formation of rocks and their period of formation.

Q 2. Examine the factors that lead to extremely arid conditions in the Atacama.

It expects students to examine different factors like Subtropical high, Double rain shadow and Cold ocean current leads to arid conditions in Atacama. You can also draw diagram/map to explain it further.

Atacama Desert extends from the west coast of Chile and spills over the bordering nations of Argentina, Peru, and Bolivia. While it’s not truly the driest place on the whole planet, it’s the driest hot desert on Earth, receiving less than 0.6 inches of rain on average the whole year.

The Atacama Desert can attribute its astoundingly low precipitation to a combination of several “drying” factors: the subtropical high, a double rain shadow, and the cold ocean current running up the west coast of South America. These factors work together to make an amazing synthesis of dry conditions that form the unique climate of the Atacama.

Atacama Desert is an important desert to study because it encompasses many important aspects of climate. Not only this, but the desert impacts the well-being of the people that live in or around it. Understanding how the climate of the area came to be is important to understand how climate works, how it changes the environment, and how it impacts people in its environment.

Q 3. Why has the Aral Sea shrunk? Discuss.

As the directive here is discuss, you have to cover various angles related to the topic. In the introduction you explain the location of Aral sea and then brief how it shrunk. In the main body part enlist the reasons and in brief give a way forward. Drawing a map to show the location of Aral sea or showing the extent of shrinking will be a value addition.

The Aral was an endorheic lake lying between Kazakhstan  and Uzbekistan which began shrinking in the 1960s and had largely dried up by the 2010s. Today, the lake-which was called a sea due its sheer size and salinity-has reduced to a mere 25 per cent of its original size. The re-routing of Amu Darya river and Syr Darya river to give impetus to cotton production aggravated shrinking of the Aral Sea.

In the 1960s, the depth of the lake was 68 metres. Today, it is less than 10 metres. A relatively shallow water level spread across a large surface area has led to faster evaporation. This has caused over 90 per cent loss in the volume of water in the last six decades. Following are the major reasons for the shrunk: 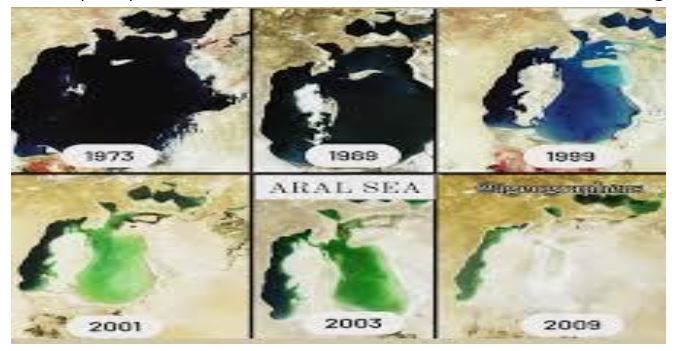 Figure 1: Drying up of the Aral sea

In 1993, Central Asian countries-Kazakhstan, Kyrgyzstan, Tajikistan, Turk-menistan and Uzbekistan-established the International Fund for Saving the Aral Sea to rehabilitate the affected region ecologically. The mission was to save the people living in Aral Sea basin by improving their living conditions.

In 2005, the Kokaral Dam was built in a joint collaboration between the Kazakh government and the World Bank to restore the delta and the wetland region in Syr Darya River basin. However, these sporadic efforts are not enough to revive the basin spanning seven nations. A cross-country method needs to be put in place by owning collective responsibility. Because it may take many generations to revive the lost lake back to its original glory.

plateau affect the climate in the Indian subcontinent? Discuss.

Highest and largest plateau in the world and hence called the ‘roof of the world’. Formed due to collision of the Indo-Australian and Eurasian tectonic plates. It covers most of the Autonomous Tibetan Region, Qinghai Province of Western China, and a part of Ladakh in Jammu and Kashmir.

The importance of Tibet to the world’s geopolitical events is much understated. Often relegated to as the China issue, it holds enormous geopolitical and environmental significance, especially in context of Asia. As a geographical region, Tibet is a rich bed of minerals, water bodies and energy resources. It has often been referred to as the roof top of the world given that there are 10 river systems originating here, and is also considered the maker of Asian Monsoons. Therefore it needs to study well for sustainable environment.

Q 5. Discuss the factors that led to the formation of the Deccan traps.

It expects students to write about Deccan traps and factors leading to the formation of Deccan traps.

Deccan Trap is a thick sequence of late cretaceous basaltic lava flows. Due to erosion this basaltic lava soil has been eroded step wise which is often termed as Deccan trap. This Deccan trap is widely prevalent in Deccan plateau, covering Saurashtra, Maharashtra, Karnataka parts of Tamil Nadu and Andhra Pradesh. Its thickness is not uniform rather it is somewhere deep and somewhere shallow depending on the surface whether flat or sloppy.

Factors that led to formation of the Deccan traps:

Deccan trap is one of the important formation in Indian stratigraphy. The lava erupted all along the fission crack in the surface of the earth intermittently. It is the store house for many minerals and black soil important for Indian agriculture therefore studying it can help in better understanding of Indian geological set up.