It is strait forward question where it expects students to write various weather phenomena associated with low pressure system.

A low pressure system is a large mass of air that is rising due to warmer land or water below it. The air becomes hot and starts to expand, becoming less dense. When there is also moisture in the air mass, it will weigh less due to the water vapour whose molecules are lighter than air molecules. The end result is wet, less dense air that rises and begins to cool in the upper atmosphere.

Low pressure conditions create phenomenon that widely affects the life and agriculture of people affecting economies of country in both productive and destructive way.

2. Why are some parts of India are highly prone to earthquakes? Explain.

It expects aspirants to write reason behind frequent earthquake in some part of India. You can also draw map to show high earthquakes occurring region.

Earthquakes are caused due to tectonic shifts below the earth surface. India’s case is quite serious as the Indian subcontinental plate grinds against the Asian continental plate. India cities, particularly towards the north and closer to the Himalayas, face a bigger threat.

Due to the country’s topography, it is important to classify the regions into seismic zones with respect to the likelihood of an earthquake occurring in the region: 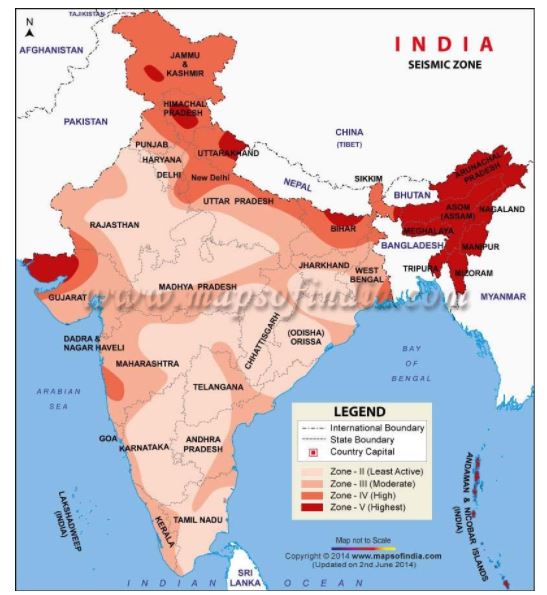 Reasons why some regions are prone to Earthquakes in India: –

The threat is as real as it gets and preparedness is the only solution to avert something that is beyond human control. Although none of the metropolises have been hit by major quake in India recently, the potential devastation it could cause is catastrophic.

As directive here is discuss, it is required to cover various angles related to the topic. In the introduction explain what is plate tectonics. In the main body part explain various geophysical phenomena associated with plate tectonics. You can conclude by explaining the role played by plate tectonics in shaping the different physical features on the earth.

Plate tectonics, is a scientific theory describing the large-scale motion of seven large plates and the movements of a larger number of smaller plates of Earth’s lithosphere, since tectonic processes began on Earth between 3.3 and 3.5 billion years ago.

Plate tectonics, theory dealing with the dynamics of Earth’s outer shell-the lithosphere-that revolutionized Earth sciences by providing a uniform context for understanding mountain-building processes, volcanoes, and earthquakes as well as the evolution of Earth’s surface and reconstructing its past continents and oceans. Further progress in understanding the process of plate tectonics will definitely help to realise any threat posed by earthquake like phenomena and will surely provide a way out to face these kind of calamities in future.

4. How do activities associated with the solar surface affect the earth? Illustrate.

Approach – It expects students to write about solar surface and how does it affect the earth with illustrations.

The Sun is a sphere, composed almost entirely of the elements hydrogen and helium.  It’s not solid or a typical gas. Most atoms in the Sun exist as plasma, a fourth state of matter made up of superheated gas with a positive electrical charge. It is a constant in all our lives. It provides the daily rhythm of sunrises and sunsets, and it’s vital to all life on Earth. The Sun’s heat passes through its surface, and in turn heats the surface of the Earth.

Solar surface – The surface of the Sun, the photosphere, is a 500-kilometre-thick region, from which most of the Sun’s radiation escapes outward. This is not a solid surface like the surfaces of planets. Instead, this is the outer layer of the gassy star. We see radiation from the photosphere as sunlight when it reaches Earth about eight minutes after it leaves the Sun.

Some real-world examples of impacts?

India’s first solar mission, Aditya-L1 satellite will aim to measure the solar surface activities and coronal magnetic fields regularly. This will help understand the spectacular solar eruptions and predictions of space weather and many more things.

The sun is the only star we can study up close. By studying this star we live with, we learn more about stars throughout the universe. The sun is a source of light and heat for life on Earth. The more we know about it, the more we can understand how life on Earth developed. As we send spacecraft and astronauts further and further from home, we must understand this space environment just as early seafarers needed to understand the ocean.

5. With the help of suitable examples, discuss the landforms associated with vulcanism.

Students are expected to write about the landforms associated with vulcanism and give suitable examples.

Volcano is a rupture in the crust of a planetary-mass object, such as Earth, that allows hot lava, volcanic ash, and gases to escape from a magma chamber below the surface and this process is called Vulcanism. Molten magma is mobile rock that forces its way in to the planes of the crust to escape quietly or explosively to the surface. The resultant landforms depend on the strength and fluidity of the magma.

Volcanic landforms are divided into extrusive and intrusive landforms based on whether magma cools within the crust or above the crust.

Intrusive Volcanic Landforms: Intrusive landforms are formed when magma cools within the crust.

Volcanic activities have profound influence on earth’s landforms as volcanic processes are constantly changing the Earth. Solid, liquid or gaseous materials may find their way to the surface from some deep-seated reservoir beneath. Eruptions can create new islands, build and destroy mountains, and alter landscapes.

Day 52 – 1. Discuss the physiographic features of shields and cratons. How do they get formed? Discuss.