In News: Inequalities in access to bare necessities like drinking water, sanitation, hygiene and housing conditions continue to exist between urban and rural India despite “widespread” improvements in each of these aspects, the Economic Survey for 2020-21 has shown, using a newly constructed “Bare Necessities Index” (BNI).

What is Bare Necessities Index?

The BNI builds on the idea of Thalinomics in the Economic Survey for 2019-20, through which it had sought to examine the access to food in the country.

The Survey has underlined the need to focus on reducing variations in the access to bare necessities across states, between rural and urban areas, and between income groups.

Key Takeaways from the Survey

Government schemes such as the Jal Jeevan Mission, SBM-G (Swachh Bharat Mission-Gramin), PMAY-G (Pradhan Mantri Awaas Yojana), may design appropriate strategy to address these gaps to enable India to achieve the SDG (UN Sustainable Development Goals) goals of reducing poverty, improving access to drinking water, sanitation and housing by 2030. There should be effective targeting of the needier population be they in urban or rural areas or across states.

A BNI value has a range of 0 to 1, with 0 being the least desirable and 1 being the most desirable score. A map on the survey shows that BNI has tremendously improved in the country between 2012 and 2018. 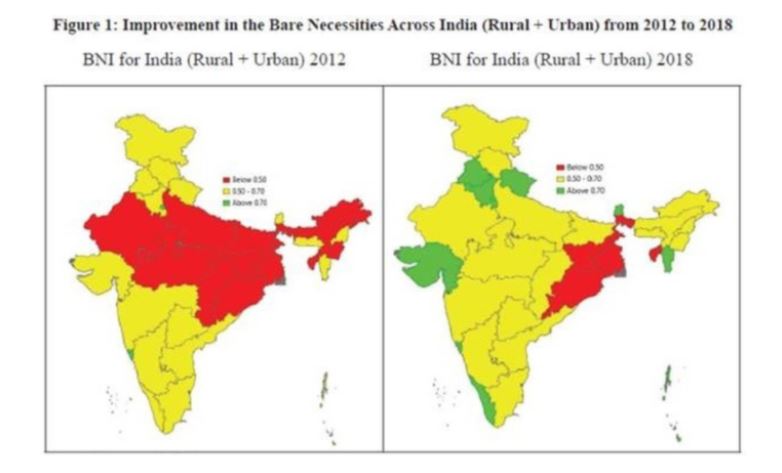 Between 2012 and 2018, access to bare necessities for the poorest households improved disproportionately more when compared to the richest households, across both rural and urban areas. “The improvement in equity is particularly noteworthy because while the rich can seek private alternatives, lobby for better services, or if need be, move to areas where public goods are better provided for, the poor rarely have such choices,” the Survey noted.