In News: India has been invested in the Arctic region for years and to secure its share of the pie that the region offers in terms of research and resources, including minerals, the Indian government has now unveiled a draft Arctic policy. It envisages India’s engagement in the Arctic region for climate research, environmental monitoring, maritime cooperation, and energy security. 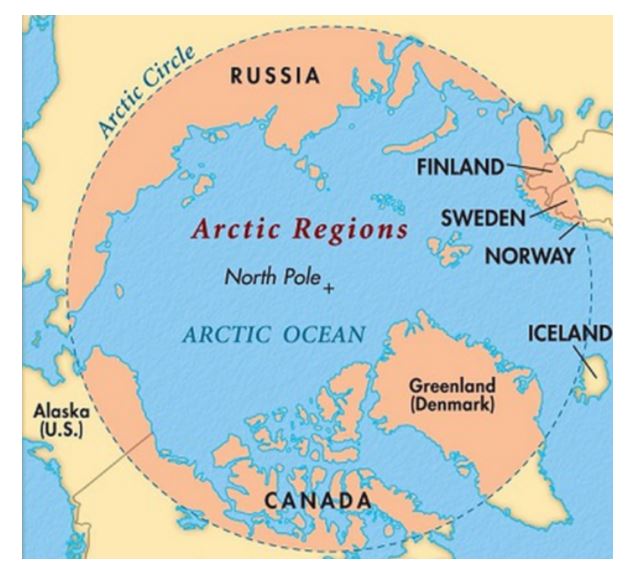 Arctic is extraordinarily rich in energy resources and ocean resources, and over 20% of Russian exports earning now come from the Russian Arctic. It is yet another reflection of the geopolitical transformation taking place that the Russian government, most recently reconstructed to have a ministry not just of the Arctic, but the combined ministry of the Far East and the Arctic. There are gas pipelines from Russia to Europe but recently an 8,500 kilometres pipeline has been constructed from the Russian Arctic all the way down to Shanghai in China. Apart from oil and natural gas, the Arctic is also very rich in other clean energy renewable resources like hydropower, wind power, and others.

India, in addition, to focus on the research in the Arctic region, it focuses on economic and trade opportunities including that related to hydrocarbons. The Arctic is the largest unexplored prospective area for hydrocarbons remaining on earth. India’s current investment in Russia is $15 billion in oil and gas projects. The region contains reserves of mineral deposits—copper, phosphorus, niobium, platinum-group elements and rare earth.

Although these resources are becoming increasingly accessible, surveys need to be conducted to assess their full potential. Environmental and social impacts due to increased human activity also need to be taken into consideration

The draft policy calls for exploration opportunities for responsible exploration of natural resources and minerals from the Arctic and identifying opportunities for investment in Arctic infrastructure in areas such as offshore exploration/mining, ports, railways, and airports. It emphasised that renewable energy (hydroelectricity, bioenergy, wind power, solar, geothermal, and ocean energy) and microgrids play a critical role in Arctic and sub-Arctic regions and that the potential for exploiting renewables to power the Arctic is enormous.

It also talks about developing fail-safe seed storage facilities in cryospheric regions, sharing expertise in the management of indigenous and other communities with the Arctic states, encouraging Indian participation in sustainable tourism in the Arctic, and cultural and educational exchanges between the indigenous communities of the glacial regions of the Himalayas and the Arctic.

Though none of India’s territory directly falls in the Arctic region, it is a crucial area as the Arctic influences atmospheric, oceanographic, and biogeochemical cycles of the earth’s ecosystem. Due to climate change, the region faces the loss of sea ice, ice caps, and warming of the ocean which in turn impacts the global climate.

According to the draft policy, India could be particularly impacted as changes in the Arctic have an effect on water security and sustainability, weather conditions and monsoon patterns, coastal erosion and glacial melting, economic security, and critical aspects of national development

The frigid Arctic, which keeps losing ice due to global warming, is one of the batteries feeding the variations in Indian monsoons, over 7,000 kilometres away. Studying the response to warming in the form of melting is quite relevant to India as it provides tools to monitor changes in the Arctic.

Rise or decrease in temperature in the Arctic region makes a significant difference to the monsoon and cold waves in India. So, if we are able to study the Arctic region properly and incorporate that in our climate models it can help in improving the accuracy of our climate forecast. The science is very clear that if the model does not include the details of the Arctic region the forecast won’t be accurate.

Research in the Arctic region is also crucial because it has the fastest-changing climate on the earth right now (due to climate change). So if the changes due to climate change amplify in the region, it would have huge implications for a country like India.