The questions asks us the basic concept of Sea floor spreading theory which can be a possible introduction. Along with the theory we also need to explain why sea floor spreads and what are its consequent events related to it.

Forces that cause Seafloor spreading

Consequently, it was deciphered that

The Geophysical phenomenon associated to sea floor spreading theory include:

Geographers have combined the knowledge from Plate tectonic theory, Sea floor spreading theory as well as continental drift theory to explain the formation of various physical features and geological processes on earth.Further these theories combined with modern technological advancements have helped humankind to predict various disasters more efficiently and save lives this making lives more secure and economy resilient.

2. If you observe the map of the world, you will realise that the volcanic activity in the oceans is almost parallel to the coastlines. Why? Explain with the help of suitable examples

A volcano on Earth is a vent or fissure in the planet’s crust through which lava, ash, rock and gases erupt. A volcano is also a mountain formed by the accumulation of these eruptive products. Volcanic activity is the phenomenon of eruption of molten rock (magma) onto the surface of the Earth where lava, pyroclastic and volcanic gases erupt through a break in the surface called a vent.

According to the plate tectonic theory, earth’s crust is divided into several major and minor rigid slabs called plates. These plates move horizontally over the underlying asthenosphere. These plate sometimes move towards each other, sometimes they move apart and other times one will sink while the other rises over it. 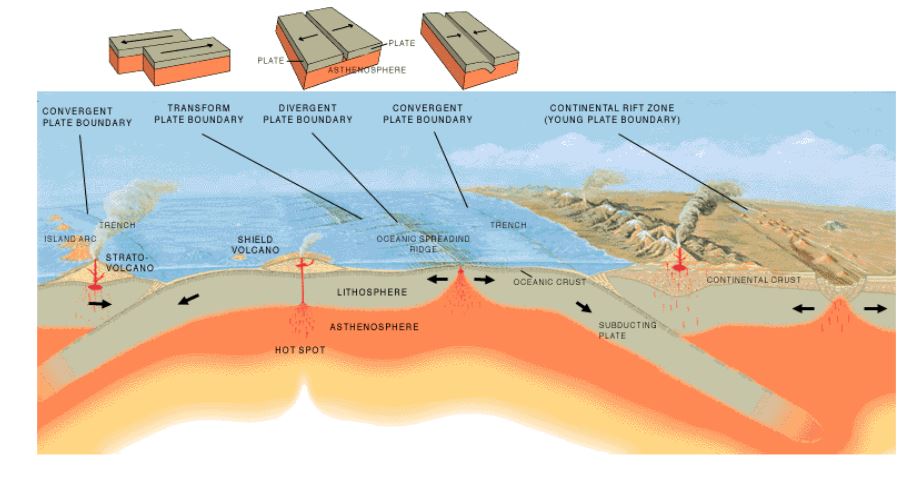 Fig.Volcanic activity along the coastline

There are two types of plate boundaries that exist parallel to the coastlines and responsible for volcanic activity.

Other than these two types of volcanoes there exists a third type known as Hotspot volcanoes which are far away from the tectonic activity pf the plate boundaries and therefore are not parallel to the coastline.The best example of hot spot volcanism is the Hawaiian Islands.

Therefore the volcanic activity observed parallel to the coastline across the world is mainly due to the divergent and convergent plate boundaries which is explained by the plate tectonics theory.Further these volcanoes have also been responsible for earthquakes and tsunamis and thus many nations have monitoring sites at the volcanic activity for future predictions and mitigation.

3. How are different vulnerable groups getting impacted by COVID? What measures

should be put in place to assist such groups? Discuss.

The question is based on the current situation of COVID pandemic.The candidate first need to introduce that how covid has led to a disastrous situation all over the world.In next part address specific issues to various vulnerable groups.At the end suggest what measure can be taken to overcome the problems being faced by the vulnerable groups.

The COVID-19 pandemic is first and foremost a public health emergency, but the ripples of its effects extend far beyond the infected individuals. A major global recession  the worst the world has seen since the Great Depression  has emerged as a result of countries being placed on coronavirus lockdown. A crisis of such proportions only serves to exacerbate pre-existing inequalities, putting vulnerable populations at even greater risk for poverty and suffering. In the context of India, the pandemic particularly endangers individuals belonging to the traditionally socioeconomically disadvantaged groups.

The vulnerable groups which are exposed to their vulnerabilities during COVID-19 pandemic are- Women, Children, Students, Aged, Disabled, Poor migrants, unorganised sectors workers,  People living with ailments and Sexual Minorities.

The COVID-19 pandemic affected these vulnerable sections of population differently:

Measures to provide relief to these groups:

India’s size and diversity mean blanket national responses will not always be effective.Hence a decentralised response to the specific issues of each state and vulnerable groups is necessary to make it a more targeted approach.For this it is prudent that both the Central and State governments work in tandem to come with civil society to have a cohesive response in this difficult time.COVID-19 is a once in century event and therefore response to it has to be different from traditional patterns followed until now.This will bring India back on path of growth and induce resilience for future crises.

Day 105 – Q 1. The technological advancement in the field of biometrics is reaching new heights with each passing day. Some of the solutions offered by biometrics are being used to improve the lives of millions of Indian citizens. Can you identify some of them? What potential do you see in the use of biometrics in further utilising it in areas that are hitherto untouched in India? Comment. (10 Marks)