1. What are land banks? What purpose do they serve? Examine their potential in India.

The candidate first needs to define what is land bank.In next part address what is the purpose of setting up of land banks and in last write what are its potential in India.Make use of recent initiatives by Indian government and states government to substantiate your arguments

Land banking is the practice of aggregating parcels or blocks of land at current market rates or lower, for future sale or development. Recently Indian authorities have identified land parcels across the country and are developing a land pool to woo companies moving out of China after the pandemic that originated in the country. The land parcels identified by the authorities are spread across the country in states such as Gujarat, Maharashtra, Tamil Nadu and Andhra Pradesh.

Inordinate delay in land acquisition has been one of the biggest obstacles in India’s bid to emerge as a major industrial nation, with several foreign companies, including Posco and Saudi Aramco, facing the brunt of a myriad of rules and regulations. Land acquisition has also resulted in large-scale protests against an SEZ in Nandigram, a Tata Motors plant in Singur (both are in West Bengal) and Vedanta’s bauxite mining proposal in Odisha’s Niyamgiri.Therefore the government has recently launched GIS enabled land banking portal which has all the information on the parcel of land available to the logistics which the area will facilitate.

Potential of Land Banks in India:

India has historically been lagging in the level of industrialisation which a society needs.This has led to problems of disguised employment in agriculture, agrarian distress, lack of employment, poverty and overall socioeconomic backwardness.Therefore the pandemic is great opportunity to put a major thrust on reforms which will bring more investment and lead to new jobs and industries.Therefore the land banks scheme being brought by Union government with other reforms such as product linked incentive scheme and laboratories reforms will help India achieve its industrialisation targets.

2. Lands reforms were implemented to bring about a change in economic conditions of the poor and downtrodden in country, but did it serve the intended purpose? Examine

In a narrow sense, land reform means the distribution of surplus land to small farmers and landless tillers, accrued as a result of the implementation of the ceiling on agricultural holdings. More broadly, it includes regulation of ownership, operation, leasing, sales, and inheritance of land. The Land Reforms of the independent India had four components: The Abolition of the Intermediaries, Tenancy Reforms, Fixing Ceilings on Landholdings ,Consolidation of Landholdings.

Need for land reform in India

Failures of Land reforms in India

This overall failure of land reforms is a primary reason for low productivity, disguised labour, class divide and lack of democracy in villages, abject poverty of marginal and landless farmers, entrenchment of caste.

The pace of implementation of land reform measures has been slow. The objective of social justice has, however, been achieved to a considerable degree. Land reform has a great role in the rural agrarian economy that is dominated by land and agriculture. New and innovative land reform measures should be adopted with new vigour to eradicate rural poverty. Modern land reforms measures such as land record digitisation must be accomplished at the earliest.

3. What is a loan guarantee scheme? How does it operate? What are its pros and cons as an economic instrument? Discuss.

In introduction the candidate needs to mention the basics of the loan guarantee scheme and contextualise to Indian scheme recently launched.In next part address the directives of question which are operation of scheme and positives and negatives of the scheme.

A credit guarantee scheme provides third-party credit risk mitigation to lenders through the absorption of a portion of the lender’s losses on the loans made to SMEs in case of default, typically in return for a fee. The Emergency Credit Line Guarantee Scheme (ECLGS)  if Indian government has been formulated as a specific response to the unprecedented situation caused by COVID-19 and the consequent lockdown, which has severely impacted manufacturing and other activities in the MSME sector.

Credit markets for small and medium size enterprises (SMEs) are characterized by market failures and imperfections. Up to 68% of formal SMEs in emerging markets are either unserved or underserved by financial institutions, with a resulting credit gap estimated to be close to $1 trillion. Public credit guarantee schemes (CGSs) are a common form of government intervention to unlock finance for small and medium enterprises (SMEs). More than half of all countries in the world have a CGS for SMEs and the number is growing. 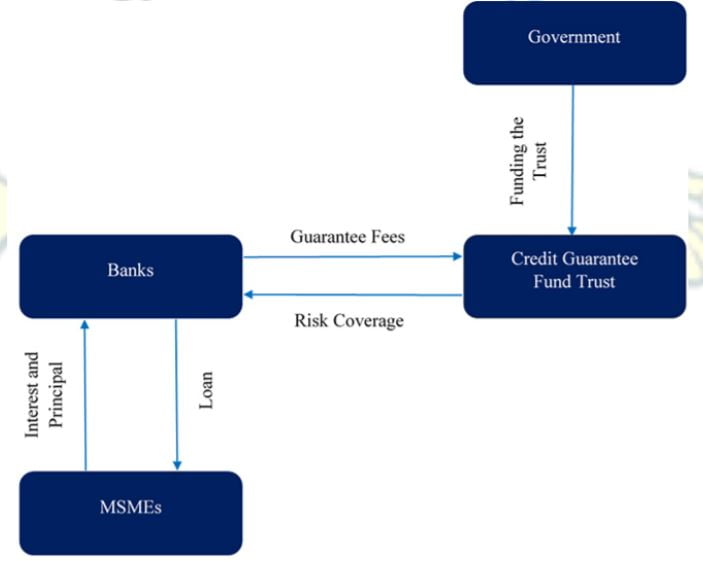 The Scheme provides credit availability to MSMEs and small businesses to meet their operational liabilities and revive their businesses which got affected due to two months’ countrywide lockdown. It will bring a positive impact on the economy and will mitigate the distress caused by the Corona pandemic.Further to make it more impactful the government and RBI should work together to address the issues highlighted by the msme sector for better uptake of the scheme across the sector.