So Here is the story for this week – Walt Disney ! 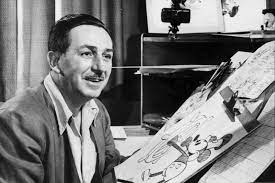 Everyone knows who this legend is.  But, did you know before Walt Disney was “The Walt Disney”, he had once been fired because his boss thought he lacked imagination and had no good ideas?

We know, it’s crazy to think that he would ever be considered the opposite of what he ended up being so great at.

Fortunately, Walt Disney didn’t listen to his critics, and pressed on to create his own cartoon animation company.  Now, just because he pressed on doesn’t mean he hit it big right away.  He would go on to experience a few additional failures along the way (along with few small successes), but ultimately, he kept on pressing forward, innovating, and improving on his love for animation.

And, well…he eventually smashed through those doors of success and went on to become the creator of the household name that we’ve all come to know and love.

Truly, every success, at some time or another, has had to learn how to believe in themselves when no one else on this big blue planet is willing to hold the same belief.  And the chances are high you’ll have to do the same.

So, when someone tries to halt your vision, just remember good ole Walt Disney.  Ignore your critics, believe in yourself, and get yourself back into the game.