Part of: Prelims and GS-II- Governance

Part of: Prelims and GS-III- Environment

In News: The Supreme Court approved the measures taken by the Centre’s Air Quality Commission to create an ‘Enforcement Task Force’ and flying squads to prevent and penalise polluters in Delhi NCR.

Functions of the Commission:

Powers of the Commission:

Part of: Prelims and GS-II- Health

In News: The Ministry of Women and Child Development has spent over ₹1,000 crore on its Poshan or Nutrition Tracker, which records real-time data on malnourished and ‘severe acute malnourished’ children in each anganwadi.

Part of: Prelims and GS-II- Governance

In News: The Centre has sought ₹25,000 crore as additional funding for the Mahatma Gandhi National Rural Employment Guarantee Act (MGNREGA) scheme as part of the supplementary demand for grants submitted to Parliament. 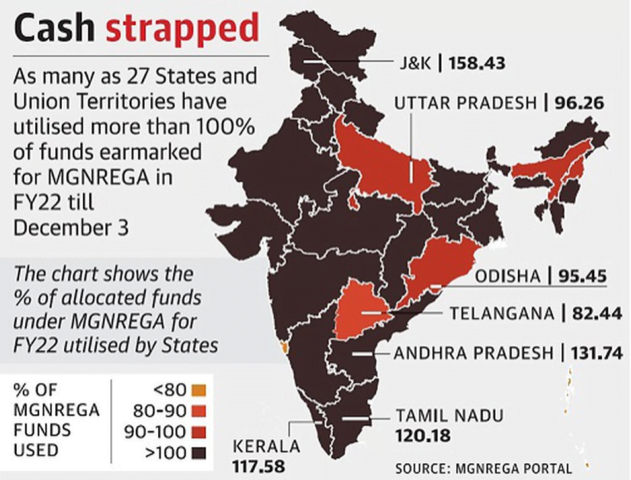 Global Hunger Index (GHI) does not reflect India’s true picture as it is a flawed measure of ‘Hunger’.

It should not be taken at face value as it is neither appropriate nor representative of hunger prevalent in a country. Out of its four indicators, only one indicator, i.e., undernourishment, is directly related to hunger.

Part of: Prelims and Mains GS-III – Defence and security

In News: A contract has been signed for delivery of S-400 system from Russia.

Context: Government has taken various initiatives/steps to enable digitalisation of agricultural sector in the country and to promote agri-tech business:

Context: The Dam Safety Bill was passed by Parliament on Friday amid strong objections from the Opposition. While it was passed by the Lok Sabha in August 2019, it was cleared by Rajya Sabha on Friday.

What is the Dam Safety Bill?

What is the Context of Dam Safety Bill?

What are the objections by Tamil Nadu?

In a country where most of the dams are built, operated, maintained and owned by state governments, the impact of the Act remains to be seen when long-pending disputes arise.

Brief Background of the issue

The Protection of Plant Varieties and Farmers’ Rights (PPV&FR) Act, 2001:

Rights under the Act:

Context: The world population is over 7 billion – and more than one billion people (or around 15% of the world’s population) live with some or the other form of disability – 80% of them in developing countries.

Disability can be seen through various perspectives-

Launching schemes is not enough, we need to ensure that the schemes are implemented in their true spirit, and the society must be made aware so as to remove the social barriers present and convert disability into an opportunity.