In News: The Environment Ministry proposes to soften the provisions of punishment for the violations of Environment Protection Act (EPA)

The two major changes proposed are

In News: Minister of Consumer Affairs, Food & Public Distribution released the 1st edition of ‘State Ranking Index for NFSA’ during the conference of Food Ministers of States/UTs on ‘Food Nutrition and Security in India’

In News: Pointing out that the problem of pendency of cases is “intensifying” due to lack of sufficient number of judges, Chief Justice of India again points out the delay in appointment of judges

Pendency of cases in India

In News: Gujarat plans on restoring at least 76,000 hectares of this 2,497 sq km grassland which is a high-biodiversity area.

In News: Around 100 students in Sikkim have reported skin infections after coming in contact with Nairobi flies.

What are Nairobi flies? 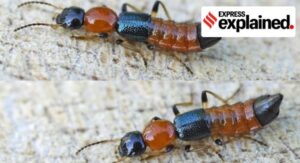 How are humans affected by them?

Have there been outbreaks of the disease?

In News: Protests in Uzbekistan’s autonomous province of Karakalpakstan

Who are the Karakalpaks? 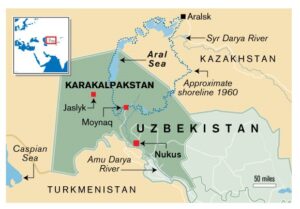 What is the region’s history?

What triggered the recent protests?

How has the government reacted?

Why do the Karakalpaks feel neglected?

Community sometimes of mentioned in the news: In the affairs

In News: Foreign Portfolio Investors (FPIs) have been on a selling spree in India.

Why have FPIs been selling India holdings?

What impact does an FPI sell-off have?

Q.1) With reference to Foreign Direct Investment in India, which one of the following is considered its major characteristic? (2020)

In News: Recently, the Karnataka High Court passed a verdict on handcuffing, which is significant.

Who should pay compensation?

Context: The CBI has booked former CMD Kapil Wadhawan and director Dheeraj Wadhawan of Dewan Housing Finance Ltd (DHFL) in one of the biggest banking fraud in India.

Q.3) Karakalpakstan, recently seen in news is located in?

ANSWERS FOR ’6th JULY 2022 – Daily Practice MCQs’ will be updated along with tomorrow’s Daily Current Affairs.