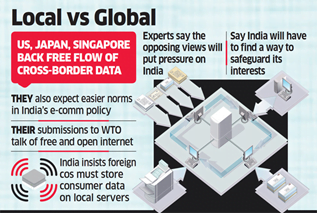 Arguments in favour of need for data localisation:

India has a stronger bargaining chip than most nations in pushing for data localisation — access to its billion-strong consumer market.

Ninth Schedule of the Indian Constitution and Jharkhand Reservation Bill