Context: The Digital India Programme has made the country digitally empowered in the area of technology and innovation.

About the Digital India programme:

Digital India is a flagship programme of the Government of India with a vision to transform India into a digitally empowered society and knowledge economy. The programme was launched on July 1, 2015 by Hon’ Prime Minister Shri Narendra Modi. 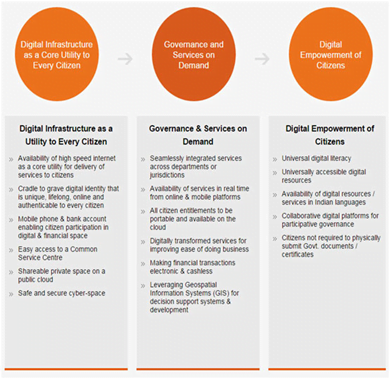 Outcomes of the programme:

Significance of the Digital India campaign

Key initiatives undertaken by MeitY under the Digital India programme:

Need of the hour is to establish an empowered entity needs to be set up which is accountable for quality and timeliness to design and construct digital highways, and their rural branches, and ensure their optimum utilisation by sharing the infrastructure. Digital skills, required today both for life and for livelihoods, must be imparted on a war footing by transforming government digital literacy programmes into skilling missions, and expanding outreach, including through the private sector.

The Social media sites can use their “algorithm power” to proactively tackle the issue of safety. Thus, the government needs to strengthen laws that hold online abusers to account, and the public to speak up whenever they witnessed abuse online.