Context: The month-long Kashi Tamil Sangamam, which showcased Tamil culture, heralded a new era where ancient Indian traditions intermingle with one another and are revitalized with the help of modern practices so that they contribute to cultural and economic growth. 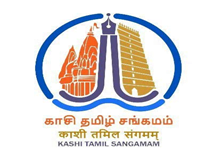 Ancient links associated with the Sangamam:

Overall Significance of the Sangamam:

The need to focus on textiles sector:

Around 2 lakh people visited the campus of the Banaras Hindu University which hosted cultural shows and a popular exhibition that highlighted Tamil products and cuisine. The Sangamam has ignited a new cultural zeal in India and whetted the country’s appetite for more. The Sangamam is the beginning of India’s cultural renaissance that is not limited to the bonding of Tamil Nadu and Kashi. It will also extend to all cultures across this Bharathabhoomi  and make this country Vasudhaiva Kutumbakam.