Context: The Govt of India recently approved Karnataka’s Kalasa-Banduri drinking water project which is facing opposition from Goa and Maharashtra. 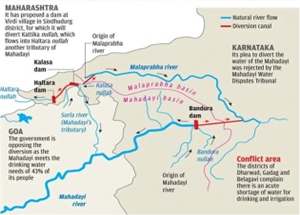 Q.2) Gandikota canyon of South India was created by which one of the following rivers ? (2022)