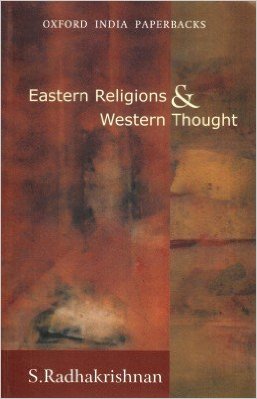 Amidst the chaos and confusion of historical events which appear to be driven by hunger for power and supremacy, there is a far deeper spiritual and universal purpose that has shaped the world as we know it today.

Sarvepalli Radhakrishnan, the first Vice-President and the second President of India, whose name was synonymous with Hindu philosophy and religion, explores the eastern philosophy and the ideology of western thought in his marvelous book.

Eastern Religions and Western Thought is a thorough and complete investigation into the ancient eastern systems of self-perfection and the western ideas of purpose and fulfillment. It is an eye opener for all those who are too obsessed with the western idea of material self-sufficiency.

This book is a fascinating read if you would like to explore the eastern philosophies of Advaita Vedanta, world religions, politics and social renaissance. The book marvelously compares the inner dimension of eastern philosophy to the outward appearance of western thought.

If you would like to know what is the real meaning of life and living; why is it that there is so much of pain and suffering inspite of all the economic and social developments across the world; read Eastern Religions and Western Thought.

Radhakrishnan was the professor of Eastern Religion and Ethics at University of Oxford. He was the foremost authority on the comparative understanding of Eastern Religions and Western Philosophy. This book is a must read for all those who are interested in the social, religious, political and economic landscape of India and the world.