A recent survey by Centre for World University Rankings featured not even a single Indian university in the top 300 universities in the world. This reflects the poor condition of our Indian universities with respect to poor infrastructure and facilities, inefficient and insufficient faculty, less incentives for R&D and poor academic industry interface. Allowing foreign universities to operate their campuses in India to plug these loopholes seems a viable option considering its benefits but in the longer run it cannot be a permanent solution. There are some experts who support limited entry based on the reputation of the institution.

Education is a process which knows no boundaries. Exposure of knowledge on an international level makes an individual more aware and conscious. The debate on whether foreign universities should be allowed to operate in India can be supported since:

However, the concerns raised also stand solid ground.
1. Education disparity will increase – high fees, higher standards will make these universities a place for the rich and the elite. Class and caste differentiation will widen. Inclusive growth will suffer.
2. Foreign universities might not offer insights into social, regional, historical aspects of India. Thus, India will slowly and willingly loose its own demographic dividend, thus starting domestic westernization.
3. Students who graduate from such universities might be persuaded or themselves choose to work for foreign firms, thus beating the indigenous innovation.

2. Governance matters need to incorporate human psyche and behavioural traits for effective and efficient operation of public policies. Do you agree? Examine.

1.Governance is a process resulting from effective interaction of govt, civil society and the private institutions. The more government as an institution can understand the needs of citizens, the more effective and easy the governance will be. Apart from the transparency initiatives like RTI and gradual progress towards e-governance, understanding what people demand and desire holds paramount importance.

2.Government introduced tax on PF withdrawal and they had to unfortunately withdraw them within days after huge cry and also they are in process of withdrawing excise duty on jewellery with ongoing protests. This has led to debate on incorporating human behavioural and psyche for effective implementation of policies.

Give your affirmative stand.

However, such operations can add delay in framing urgent policies and may lead to one section unhappy if their suggestions are not incorporated. It then becomes essential for government to choose best of all suggestions and that too in limited time. Government has to persuade citizens to participate more in debates and discussions on policy matters. Apart from educated class, opinions of lower strata of society also have to be incorporated into. Governance will become more efficient with more public participation. 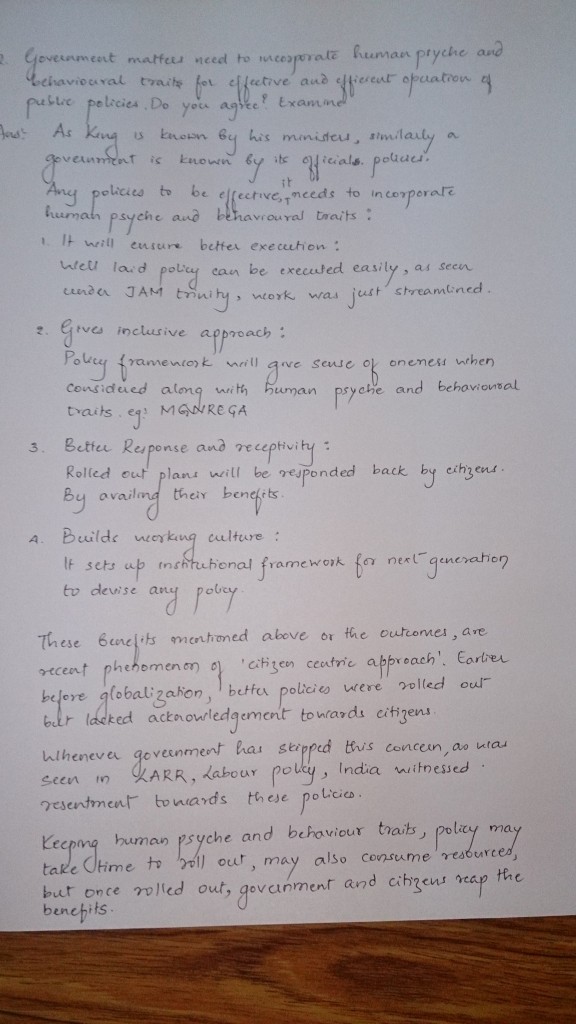 3. The best brains of the country prefer venturing out to other countries rather than staying back in India? Why such trend exists? Can you identify some domains in which this trend is endemic? What can be done to address this?

Define brain drain: the moving out of highly educated and skilled workforce from India to other countries is called brain drain. This causes double damage to economy as substantial amount is invested in their education the benefit of which is reaped by foreign countries

As per UNDP estimates India loses $2billion a year due to immigration and $10 billion of forex for paying study fees. Almost 3000 or 53% of AIIMS doctors migrated (while Indian government spend rs2 crore/doctor) to US and at the same we have huge shortage of doctors in India.

lack of funds ,collaboration and recognition in researchers.

Difficulty in starting business because of over regulation, red-tapism and higher taxes in India

Better infrastructure, funds, collaboration and recognition for scientists and researchers

Better educational prospects in higher education for students, as no Indian university features in top100 universities of the world

Briefly write your opinion and conclude.

A recent report by the national science foundation shows that Indians continue to be the single largest source of professionals populating the American workforce. Similarly a report from OECD stated that highly educated Indians were the fastest growing set of emigrants to OECD countries.

This clearly shows that India is facing a deep problem where most of its educated and best workers are lost to other countries. This situation of BRAIN DRAIN has become a major problem for India .

The reasons can be seen as follows:

1 ECONOMIC FACTORS : THIS is a Major reason for such voluntary form of migration. Low income, unemployment, underemployment are the major reasons that push people to other countries in search of greener pasture. Economic factors that motivate people can be seen in terms of PUSH AND PULL factors. Push factors include those that compel a person to migrate such as bad opportunities, low level of wages. Pull factors are those which attract migrants to an area by providing better opportunities, better amenities, higher standard of living . Both the above factors have a combined effect and cause migration.

2.SOCIO-CULTURAL AND POLITICAL FACTORS: people also migrate to get rid of social cultural problems that may have haunted them for life such as caste discrimination, class divisions and many other social factors. Political factors may include a perceived sense of increasing inequalities in our country or a sense of deprivation or sense of increasing intolerance (as was suggested by many people recently ( though these things may not have a strong basis)). Other factors such as government policies of reservation, son of soil, corruption may impact migration and cause brain Drain.

3. Due to lack of R and D (research and development) facilities and sponsors in India many scientist migrate.

This trend can be seen in all sectors however it seems endemic to the following sectors :

However its important that these schemes are implemented so as to create job opportunities in India. Also :

Its only when government and citizens take collaborated action can this situation be addressed. The government and the bureaucracy on its part need to implement the policies nicely and the citizens need to understand their duty of putting their country on top priority that provided them with all the education.

1. Globalisation is a policy choice. What do you understand by this statement? Can you provide examples to substantiate your response?