1. What do you understand by the term ‘tax terrorism’? Why this term was in news recently? What are the fallouts of this phenomenon? Explain.

Define tax terrorism: Tax terrorism is when tax authorities adopt regressive and exploitative approach to collect taxes. In this, notices are sent even to people who have duly paid their taxes, extra legal laws are applied to extract taxes, tax benefits are not given, refunds are not made on time and huge penalty is imposed in case of delay in payment of annual taxes.

Reasons for being in news:

“Tax terrorism “refers to the adversarial approach of tax administration.
This is a situation where the taxman uses his powers to extract more than what is due from an honest taxpayer
This can be done by unjust and
inequitable tax laws or by enforcing the tax law on the general public
in a harsh manner

The recent ruling of the court infavour of Vodafone where the government’s claims of violation of transfer pricing agreement by company didn’t stand judicial scrutiny
There has also been other cases where some business entities have preferred to move out of country eg:NOKIA,COLA and many start up which begin in India subsequently have been shifting to abroad

FALL OUTS:
It leads to decline in investor confidence, reflected in poor rankings on ease of doing business
it leads to inability to attract new capital and retain the existing one
economy cannot harness the potential of start ups
tax terrorism leads to individuals, companies shall search for means to evading tax,leading to generation of black money which in turn breeds organized crime and other evils
hence there is need to rationalize tax structure according to recommendations given by expert panels like shome,eshwar committed and direct tax code for direct taxes and bringing in tax reforms indirect taxes like GST to widen the tax net without terrorizing honest tax payers

One of the distinct features of India post independence was its NAM policy. With the world divided into 2 factions, India took a neutral stand in the Cold War and led a new group of Third World Countries which was based on the policy of independence from great powers and taking its own stand while promoting decolonisation. This helped India formulating its own policy without any external interference and concentrate on its own internal problems .India emerged on the global platform and was benefitted by favours from both the factions without any direct association with them.

India had to gradually move from Non Alignment to Multi Alignment soon after breakdown of USSR and opening up of Indian economies by the LPG reforms. The multi alignment especially in present global scenario is the need for India.

2.Economic Security – The rise of TPP, APEC and other trade blocks necessitate to engage with various other countries to protect economic interest. The engagement of India with ASEAN, EU and Canada, India-Africa summit will enhance trade relations.

4.Social security – The increasing demand of employment opportunity can only be met both through domestic opportunity and opportunity in foreign countries. New Delhi is continuously engaging with US, EU and middle-east to secure the rights of Indian workers.

1) Allows India to absorb the best from different countries while satisfying the needs of energy, investment, defence technology, maritime security.

2)Enhances goodwill and soft power of India to be used in multi lateral forums to voice the concerns of developing nations in terms of climate change and fasten unsc reforms seen through multilateral g4 forum.

3)The change in policy has diversified markets of India and lowered dependency on Russia and US only.

4) Increases the investments in India which will tap the demographic dividend, enhance make in India programme and generate employment.

But there are some challenges in this multi alignment policy such as treading a difficult path when dealing with Iran and Saudi Arabia in West Asia , struggle for supremacy in Asia Pacific between China and USA , Israel and Palestine issue.

India has improved its relations with almost all its neighbors especially China with whom it is collaborating on many economic projects like BCIM,OROB etc. India has played an imp role in multilateral organisations like IMF,WB,UN etc and has found new organisations like AIIB ,NDB etc. Its leadership in the Paris Summit was appreciated by many. It has strategic partnership with almost all the major power of the world .India’s multi alignment policy has allowed India to secure its interest without any direct confrontation .It should use it to solve its border issues and global issues peacefully and emerge as a global power.

You may also refer to the following articles: 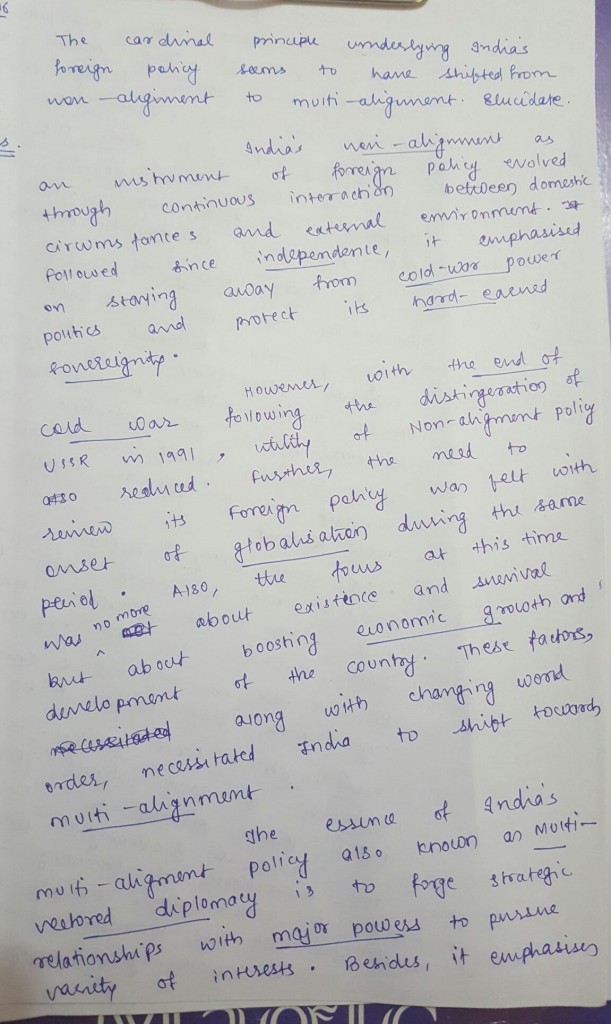 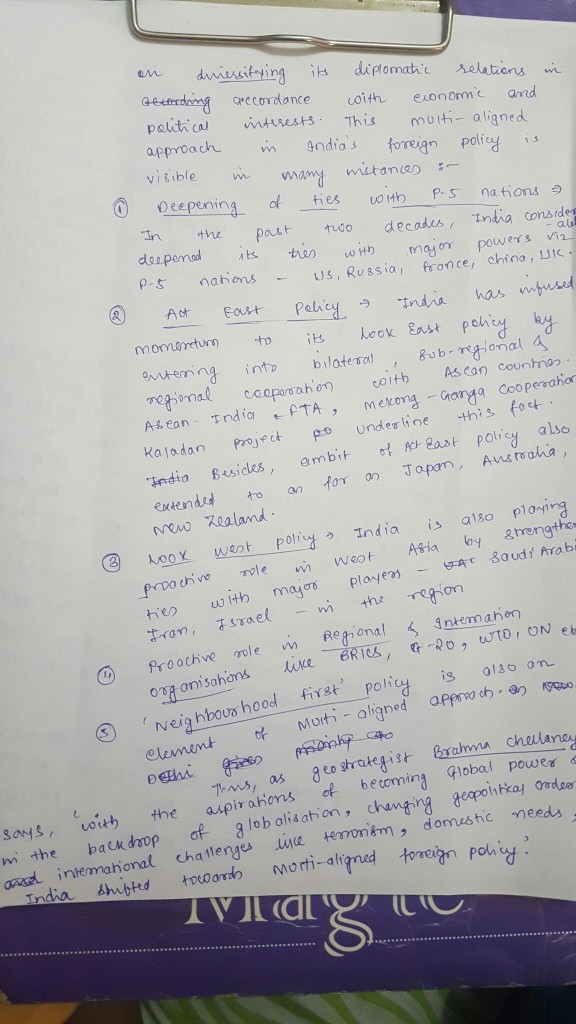 3. In the global supply chain of textiles, where does India stand? Is there any room of upgrading our position towards greater value addition? Examine. Also suggest strategies to meet this end?

India is now a fast emerging market inching to reach half a billion middle income population by 2030. Indian textiles currently rank second in the world after China with respect to textile garments. After agriculture, textiles is the one which provide maximum employment, around 14% Indian population is engaged in this segment and contributes around 4% in GDP.

All these factors are good for the Indian textile industry in a long run. Even though the global economic crisis seems to be worsening day-by-day, as long as economies are emerging and growing as those in South and South East Asia, textile industry is here to grow provided it takes competition and innovation seriously.

Indian textile industry should have focused on all major sectors right from fibre to fashion and planned for an organized growth across the supply chain so as to compete with China and even countries such as Pakistan, Vietnam and Thailand. Instead, the industry had put majority of its stock in the spinning sector. This is clearly evident in the utilization of Technology Upgradation Fund Scheme effectively by the spinning sector. Although it is a positive outcome, it is accepted by many that, the industry turned a blind eye on value-adding sectors such as weaving and finishing.

There is sufficient room to upgrade our position towards greater value addition if the following areas are addressed:

A couple of points given below will give food for thought for all the stake holders in the Indian textile industry:

These steps are conducive for investment and would attract private players both domestic as well as foreign. Increased investment would enhance efficiency and would add value to the Indian textile production.

Being a tropical country with favourable climatic conditions, India has the top place in producing top quality cotton production. With the export of our fine raw cotton, Manchester has become the textile hub of the world, but India is still struggling to become a textile industry giant. With growing stiff competition from other countries like China, Indonesia, Bangladesh etc., India’s textile industry had seen declining growth rates in the recent past.

India’s exports are limited to cotton and yarn instead of finished goods and that is the reason why we have not reached our forex earning potential and cumulative profits are low. There is lot of room for India’s position towards greater value addition, and is described below:

> Technological upgradation in looms increases fineness and quality of our material.

> Promotion of linen and khadi industries to adopt modern designs would increase their value.

> Employment generation and export by encouraging apparel and garment industry.

> Promotion of incubation centres for garment industry in Start Up India.

> Promotion of handloom and handicraft goods with GI tags and branding.

> Establishing storage and manufacturing clusters as fineness of cotton is highly sensitive to climatic conditions.

Cotton yields are consistently growing with the implementation of biotechnology like GM Cotton. But the main problem lies in the textile industry itself. Therefore, there is an urgent need to ramp our textile industry with innovative measures to take back India in the top list.

1. What rationale do you find behind the decision of the government to allow 100% FDI in e-commerce while FDI in multi brand retail remains below par? critically examine.