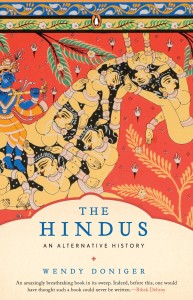 The Hindus – An Alternative History

The Hindus – An Alternative History by Wendy Doniger is one of the most comprehensive books on the origin and development of one of the world’s greatest and ancient religions, Hinduism.

At just about 800 pages, it covers almost all the important historical events connected to Hinduism. The Hindus is not just a book about Hinduism; but rather a detailed account of history and culture in and around the Indian Peninsula.

Although the book has been controversial, and considered by some as a blasphemy on the Hindu culture, it contains insights that will shine light on the origin, functioning and development of the Hindu Culture.

The book is marvelously scientific and precise in its research and understanding of a culture through archeology, architecture, religion, society and natural phenomenon.

The Hindus can be read not just for its enormous depth and insight on the Hindu culture; but also to understand the structure and make up of ancient civilizations. ‘The Hindus’ explores the causes and circumstances under which major civilizations flourish and perish.

This book is sure to transport you back in time to the ruins of the Harappa and Mohenjo Daro cities, their intricate and sophisticated architecture and to the life and culture of the people who lived there. It will also expand your understanding of one of the world’s most ancient civilizations.