Time for a “new fiscal framework” 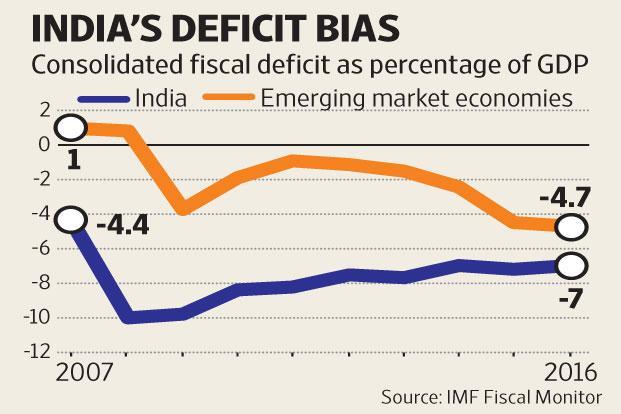 All these would create enormous risks to our long-run fiscal condition by driving interest costs to an intolerable share of revenues.

Hence, there is need for a fiscal law that will impose legal restrictions on the ability of governments to borrow.

Discussions on the need for new fiscal framework:

Article 292 deals with “Borrowing by the Government of India”

N.K.Singh Committee to review the working of the Fiscal Responsibility and Budget Management Act and suggest the way forward:

Key problems the N.K. Singh committee will have to deal with:

The move to a cyclically adjusted fiscal balance—or the fiscal deficit as a percentage of potential output rather than actual output—seems an attractive one, but there are significant challenges in making a credible transition to the new framework. There are two important issues:

(Remember that potential output is not directly observed but can be a contentious statistical estimate. And that the business cycle tends to change with time)

These are key problems the committee will have to deal with if India has to move to a new system of flexible fiscal targets based on potential output.

For instance, a large reduction in the statutory liquidity ratio will allow the Indian government to automatically access a quarter of household savings in the banking system.

A significant reduction in this captive market will lead to more market discipline on the part of the government, in the sense that sovereign borrowing costs will increase in tandem with high fiscal deficits.

The disconnect between India & USA—‘Middle East’

Eagerness of the USA for Indian participation in action in the South China Sea, and its lukewarm approach to an Indian connection in Afghanistan or, for that matter, the Persian Gulf and the Saudi peninsula

Why is the ‘eastward tilt’ significant for India?

Both from the geo-economic and geo-strategic view, areas encompassing Afghanistan, the Persian Gulf and the Saudi peninsula are the most important external region for India’s security

Should US be really worried?

The recent proclamation and the push for enhanced military cooperation with India mark remarkable strides in their defence relations of both the countries.

Also, as part of military cooperation, the Indian Ocean does not quite include the northern Arabian Sea and the Persian Gulf— as India has no military capacity, it needs the US as a guarantor of a secure and stable world system, but especially as a security provider in the Persian Gulf region (most vital area of our external interest).

Incorporation of drills, joint exercises or planning with a fleet headquartered in Bahrain, and India for conflict contingencies can be the best way forward.

India needs partnerships and coalitions to maintain a secure periphery and therefore, India joined the balance of power game especially as the best way to boost immunity against threats, the best recipe to advance economic and military strength, and the shortest way for regaining its supremacy. The strategic vision statement is reflective of India’s seriousness in standing stand up against repeated incursions in Ladakh and Arunachal Pradesh, the growing presence of Chinese construction troops in Pakistan-occupied Kashmir and continued arms supplies to a Pakistan that sponsors and propels terrorists across into India—to create compelling pressures on China to stop messing with issues that concerns its core security interests.

India is the only country in Asia that can offset the massive gravitational pull of China (with huge external trade, the biggest loser from any disruption would be China itself) and hence it is important that India figures out its key problem with China and take steps to contain its rise. However, Beijing must find a new intellectual common ground with India that would enable the two to collaborate to stop the division of Asia further. A frank dialogue can build bridges necessary for resolving local conflicts and this should offer India the prospect of considering less confrontation and more cooperation with Beijing.

There is a need to do the math and press the co-development, co-production agenda to the extent it is financially viable— India will do well to find a balance between the American relevance in the economic arena and the need to collaborate with China on both economic and cultural revival theory, while filling the huge gap that exists in the ‘middle east’. This is necessary because, as the Russians say, “markets alone cannot substitute for ethics, religion, and civilization.”