At Your Own Risk: Its Time to Tide Over Your Incompetence @2016 Aspirants

While most of you are sleeping, we are writing this to wake you up. Yes, you heard it right!

Aren’t you feeling that it was just yesterday when you started off with your preparation? Time is so fast. It ticks without bothering about things like how many are left behind, or is not able to match pace or are quitting. Time is like the Sun. It will rise and set on its own terms, worrying about none.

However, we are here again to remind you of something that concerns you as much as it matters to us i.e. your future!

Many of you joined the test series and prepared for a whole year; sacrificing many things in the process, only to realize that your preparation is not up to the level it is supposed to attain. Everything seems so messy with lot of pending things to complete. Just buying a test series or the famous materials couldn’t bring that satiation or confidence. Why is it so?

Let us explain the trend to you with real examples. Many of you joined our ILP Program with full enthusiasm. The starting point seemed perfect, the plan looked promising and you accepted it with full zeal and enthusiasm. It was with full faith that you joined it and promised yourself to be true to its essence. But it didn’t last for long. You deviated from it and started running behind the crowd (lakhs of aspirants) who has the habit of becoming a sink. Yes, a sink!

Anything that is underutilized or misused will always be bad in taste. The same is happening with most of you. You are not feeling well, and are tired with least amount of confidence.

After almost at the end of ILP program and 24 days of our 60 day plan, we have certain types of aspirants following us-

There is no motivation that exists; if not stemming from within!

You can never ask for motivation or can get motivated by external factors—it is never meant to be permanent. This process is so tiring that unless you are convinced to the core that yes, this is what you want- nothing can keep you engaged. The real problem lies here. You were not convinced from the core.

Isn’t it? If yes, then what else matters to you other than your dream?

“If you even dream of beating me, you’d better wake up and apologize”.

What does this mean? He could very well sense his goal and the sort of preparation he did to achieve it that made him quote the above statement. This is called confidence.

He went on to say this

“I’m not the greatest, I’m the double greatest. Not only do I knock ’em out, I pick the round. I’m the boldest, the prettiest, the most superior, most scientific, most skilfullest fighter in the ring today.”

Don’t be mistaken by concluding that it was overconfidence. No it was not. He proved every single word he spoke. How?

He did it with his actions and saved his words in the history for generations to come.

It’s the repetition of affirmations that leads to the birth of a belief. And once that belief becomes a deep conviction, things begin to unfurl. Sadly, the belief is missing in you.

We have seen people blaming us for irrelevant questions and very difficult test series/questions. They are the ones spreading negativity about us on various platforms 🙂

And there are aspirants who followed it with full belief, learned in the process, are very regular and always emailed or called us to congratulate about their growth and confidence. Then there are people who hide their weaknesses by saying “We are discouraging aspirants by making tough questions and it is reflected in the low marks they have scored. It shows that the problem lies in our planning not in their preparation”. Really?

But we are of the same belief as Tywin Lannister-

“A lion doesn’t concern himself with the opinions of a sheep.”

The answer needs a great detailing but we will try to be precise here.

We want to tell you what our aim is when we frame questions? An ideal test paper is the one which has got a certain percentage of difficult questions, average questions and easy questions. This is the kind of paper we try to frame in our test series so that students can get a feel of the ‘real paper’ and they learn which question to attempt and which ones to leave. On the other hand, in the 60 day plan when we have to post only 25-30 questions a day, we don’t look at it as an ideal paper.

Firstly, we try to prepare you for the worst, and secondly, we are trying to hit as many questions in prelims as we can. So our topics are meticulously chosen and questions are framed accordingly so that you can understand what a difficult question in UPSC would look like.

The same articulation was followed in our test series. We intentionally framed tough questions so that you start learning more by stretching your limits. Scoring 130+ shouldn’t be the target in practice tests rather one’s focus should consistently be ‘maximization of learning’.

However, those who understood the essence have been scoring well around 130+ in most of the tests. How are they different from the ones who complain and put the blame on us? Weren’t the paper and topics same for all? Where does the difference lie then?

The difference lies in one’s perspective and approach.

Sincere aspirants understand the benefits of learning and take it as a challenge. They prepare in the same manner as we set the papers. They know that easy things will anyway be handled so they focus on working on extreme aspects. In the process, their analytical ability, knack of reading between the lines and correlating concepts get enhanced. They are aware of the fact that in real exam it is not the score in practice tests that will come to rescue but the attained knowledge. They go on to learn, learn and learn; being least bothered about the scores.

Likewise your aim should be to grasp as much knowledge as you can and prepare these topics holistically. Also you need to attempt these questions with full concentration to avoid silly mistakes. Every word which is used to frame a question has got a meaning- try to understand that. UPSC does the same and people get confused. You don’t need to over-think. Most of the times, the questions are straightforward and simple but we unnecessarily complicate them and mark the wrong option. Take this exercise as a learning platform and do as many experiments as you can and emerge with a winning combination for yourself.

After all, scoring is not always equal to winning. Isn’t it?

Below is just an example. You may have followed different plans or programs but try to relate it with the intention with which we are trying to make a point here—

ILP 2016 is running from late October: Those who must have joined it to prepare sincerely must have followed it with the required pace along with the given Plan. For them, 60 Days will be nothing but a revision exercise.

Coming to the late subscribers and procrastinators

Late subscribers (sincere aspirants) like you can also manage to cover both. How?

Joining late doesn’t reflect your non-seriousness but it may be because of unawareness about the program. Also, if you are targeting 2016, you must have done some basic preparation. More or less, syllabus and resources are common to all. We don’t have something unprecedented to give you in terms of sources.

Since your basics are clear, you should focus more on learning retrospectively. We understand that it will be practically difficult to follow all the tests as per the plan at this point. Your sole focus should be to learn all the concepts given in the tests and our content.

If you do so, consolidating your learning and knowledge will become easier. You solve 100 questions but concept wise, you learn and consolidate minimum of 300-400 related concepts.

Suppose– You have prepared Social Reforms and Bhakti Movement– Very Important from Prelims perspective. Now look at our Plan and try to find in which all tests, these topics are covered. Attack all those tests and solve all the questions and learn/revise retrospectively.

This way you will not only revise but consolidate and fill your gaps in much less time. Questions prepared by us will act as a bridge since they are prepared considering the importance of the topics and their analytical nature.

This way you can easily cover all important topics along with solving the tests and revising things simultaneously. 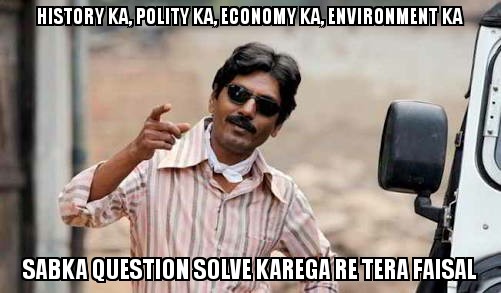 We also highly recommend you to discuss your queries here on the 60 days tests platform—Sometimes we think that what we have learnt from one source is correct and we become rigid about it. Once we encounter something that goes against that concept we blindly call it wrong. This is a wrong attitude and it might harm you in the long run. If you think that some concept is wrong or we have given a wrong answer, you can be true. We are also human and we can commit mistake. Trust us, when we tell you!

We are not ashamed to accept our mistakes. We want to guide you towards the right direction. We try to clarify your questions and doubts whenever possible so that you don’t carry a misconception in the examination hall. Putting up your questions and discussing it with your peers and us, will not only help you attain clarity but also help others who might be having the same doubt. 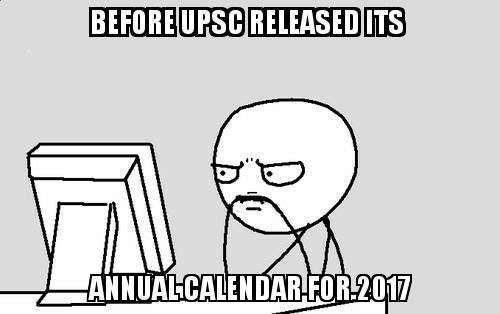 Many aspirants, who want to prepare for 2017, are in panic mode with the shift in the dates announced by UPSC. They think that there isn’t enough time now for them to prepare. And now they are like 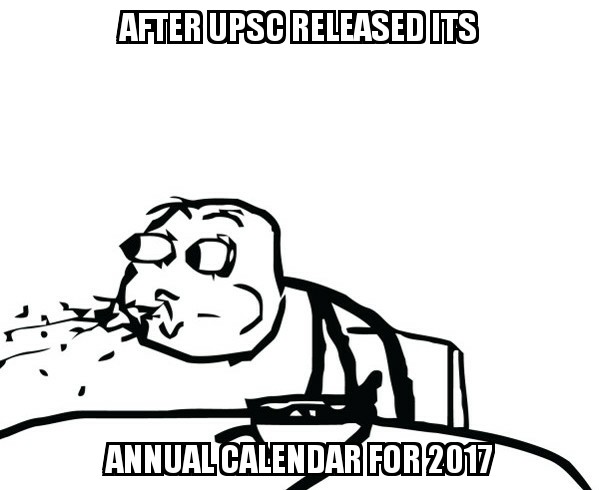 We are flooded with queries, asking things to do and various other doubts on daily basis. We want to assure all of you for one thing, IASbaba has something special for you 🙂

Friends you don’t need to panic. The time that you have is more than enough to nail this exam. In haste, don’t take a wrong decision or get into something which you will regret later on. We recommend you to read our prelims and mains strategy and start with the basic books on your own.

As a famous saying goes, “Being with a winner, makes you a winner.”

P.S- We would love reading your feedback and comments. It is the only thing that motivates and keeps us going 🙂

We promise to continue our never ending efforts to help you achieve the success that one want.

1. In the newly found awareness towards pollution and it’s mitigation, noise pollution remains relatively ignored. Do you agree? What steps should be taken to address noise pollution? Discuss.