Some basics before we go into the issue: 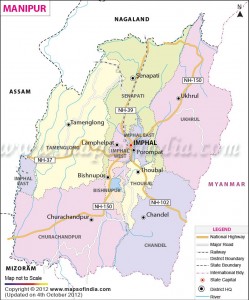 Situation can be attributed to snake and ladder game – Meitei people hold the dice (control over administration) and pawns remain the citizenry, driven by a collective hysteria accumulated by years of repression (snakes) by the Indian security establishment, a corrupt local political establishment, an economy in shambles, and paranoia over the Naga peace settlement territorially tearing Manipur apart.

Manipuri’s fires have just begun. It is important that both the Central government and State government intervene in the issue and frame a peaceful solution among all the groups, before the fire spreads throughout the state. If not country may witness one more incident such as the Bodo insurgency (Kokrajahar incident) which ultimately might lead the India’s gateway to South-East Asia to near stand-still.

Examples of the new developments based on strategic interests—

China is catching up in its trade and investment, and in some cases, its economic diplomacy has been accompanied by expanded strategic cooperation with India’s neighbours

India & the unfolding globalisation of the Subcontinent—Diminishing role of India

South Asian Region: The South Asian region is one of the least economically integrated regions in the world—

Much weight given to Pakistan:

India needs to reinvent its discourse w.r.t. Pakistan as other regions are getting pushed aside with the maximum space being occupied by one country owing to an increased focus on tackling—

Rebuilding Afghanistan— has exhausted India off considerable amount of energy and focus. In fact, the underlying issues are mostly in continuance with issues related to Pakistan— India’s strategy towards Pakistan and the battle against violent religious extremism.

Nepal has been blessed with an important strategic position (important for both India & China) and likewise, India and Bhutan share “mutually beneficial economic inter-linkages” too.

India signed its first free trade agreement with Sri Lanka and the impact of Indian investments in projects like housing and railways have continuously benefitted the local population over the past decade.

China in SL:  Since 2005, Chinese exports to Sri Lanka have quadrupled to close to $4 billion, coming closer to Indian levels (dramatic gap between Indian and Chinese contributions)

Note: Sri Lanka’s new president, Maithripala Siresena, has however suspended several Chinese projects, including the $1.4 billion Colombo port city due to the opacity of financing terms.

Maldives: is a highly coveted piece of maritime real estate and thus, there exists no doubts that China is trying to make inroads into the Maldives to fulfil its strategic objectives. Indian government has rightfully been worried of possible Chinese reclamation in the Maldives keeping events in the South China Sea in mind. India should take efforts to urgently revitalise and expand the ‘Trilateral Maritime Security Cooperation’ as well, given the growing maritime security challenges in the area and to safe-guard and further consolidate strategic influence in the extended neighbourhood.

The echoes at Gulbarg Society

Drawing Kabul into a closer embrace

Negotiating with the Taliban

India, US, a new moment

India US Defence Cooperation and Make in India Initiative

Why everyone wants a piece of India Post’s payments bank