The merger of rail and general budget is making a flutter again with news of Railway Minister accepting the Bibek Diberoy committee recommendation of merging two budgets.

Merging two is not the apt solution

The need is to maintain a status quo on separate budgets and concentrate more on strengthening, modernising and expanding the railways so as to meet its challenges of increased transportation and passenger travels.

An analysis of potential benefits and implementation problems with GST regime

GST is an important indirect tax reform that has been on the cards for more than a decade.

In the current tax regime, States tax sale of goods but not services. The Centre taxes manufacturing and services but not wholesale/retail trade.

The GST is expected to usher in a uniform tax regime across India through an expansion of the base of each into the other’s territory.

Under current tax regime, without the GST, there are –

All this will go once the GST is in place.

Why GST? What are its benefits?

The adoption of GST is an iconic example of

When we move to a GST regime, India will have not a single federal GST but a dual GST, levied and managed by different administrations.

There will be a steady erosion in the States’ freedom to decide on taxes and tax rates.

According to Constitution of India, States have complete autonomy over levy of sales taxes, which account for 80% of their revenue. An attempt was made to curtail this autonomy with the introduction of VAT but it did not succeed as VAT had 4 different rates that States could play with.

But with the GST, which mandates a uniform rate, even this limited authority will be gone. i.e., with GST virtually no taxing powers to the states.

If a State wants to undertake a special spending programme to respond to a State-specific situation, it cannot raise taxes on goods. So, innovative programmes and schemes such as Mid-day meal scheme by TN, NREGA scheme by Maharashtra which was initiated by States by raising their tax would not happen now as States does not have fiscal autonomy.

Governance within the GST council

The GST regime should remain sympathetic to these issues of States’ fiscal and political autonomy. Still we are unsure how it may affect the third tier, i.e. local bodies.

In other words, if RNR is escalated à GST rate will also be escalated à this will burden the earning classes (hurting India’s income inequality) à kills the golden egg-laying goose (purpose of GST) à therefore, RNR is self-defeating.

Better approach is to keep GST rate low, but doing so will create revenue loss to States.

Therefore, the loss in revenue of the States should be compensated by the Centre at the same time maintain low GST rate.

However, same progress or steady increase has not happened in direct taxes.

Therefore, the temptation of governments to increase indirect taxes can be curbed with a rate cap.

Approx. Rs 1.5 lakh crore is struck in litigation related to Central excise and service taxes. Disputes and cases involving on Central taxes go through appeals and tribunal processes and can drag on years.

On the other hand the State-level VAT is administered in a way that empowers tax officials to dispose of cases quickly.

Therefore, GST should deploy same approach as the State-level model which is more efficient. 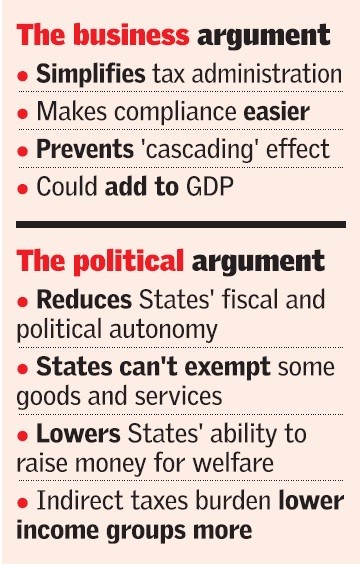 The GST is obviously not a silver bullet for all ills of India’s economy. It is nevertheless a revolutionary and long-pending reform. It promises economic growth and jobs, better efficiency and ease of doing business and higher tax collection. However, its imperfections and potential pitfalls should be sorted out as the government rolls it out.

The age of GST dawns

Good sense triumphs on the GST

Now, iron out the wrinkles

‘GST is one of the boldest reforms in post-Independence India’

GST: The road ahead for industry

Reforms and the disabled

Betrayal In The House

Tax terrorism: collecting taxes and then some more