What is a GM crop?

Why GM Mustard in news? 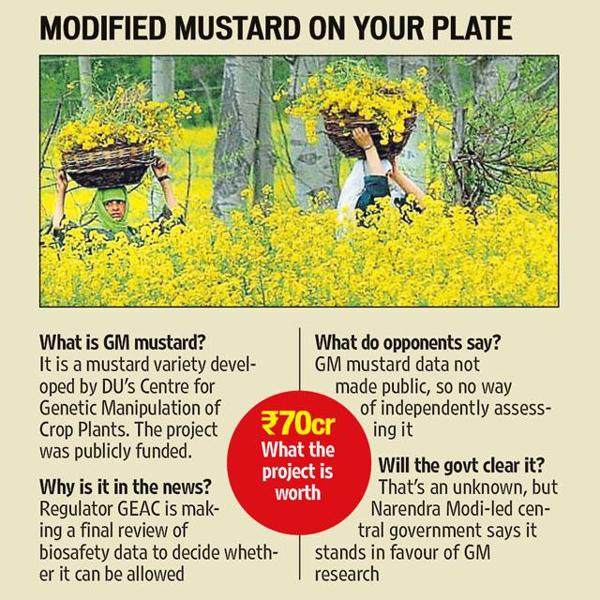 What is GM Mustard?

What scientist has done is to create a viable hybridization system in mustard using GM technology. The resulting GM mustard hybrid, it is claimed, gives 25-30% more yield than the best varieties such as ‘Varuna’ currently grown in the country.

Scientists at the Centre for Genetic Manipulation of Crop Plants (CGMCP) in Delhi University, however, showed that this problem could be addressed by crossing Indian mustard cultivars with juncea lines of East European origin like ‘Early Heera’ and ‘Donskaja’. The combination of the 2 divergent gene pools enhanced the crossing options; the resultant F1 progeny were found to exhibit significant heterosis.

What is a controversy about GM Mustard?

In a current environment where climatic change would have negative effects on yield of many major crops which could seriously undermine food security, GM crops are the way forward. However at the same time to convince the opponents of GM crops to allow commercialization of GM crops we need a strong regulatory framework. What is therefore needed is an independent biotechnology regulatory authority, a single organization that will replace the multiple committees – at least six – that are part of the current regulatory structure. This authority would deal with the use of all GMOs in agriculture, pharmaceutical and biodiversity sector.

Fraud due to illiteracy

Accounts have to be operational

Is interest rate the most important factor to borrow money and in larger picture, for financial inclusion? Not Exactly- Here’s why

Traditionally, financial inclusion meant opening new bank branches in rural and unbanked areas. But now, it should be taken now in broader sense which includes taking formal financial services across India and adapting technology to cater needs of the grass-root level beneficiaries.

The die is cast- India and Pakistan

What is the ideal distance between two ports?