What are Non Performing Assets?

As per Reserve Bank of India (RBI), an asset, including a leased asset, becomes non-performing when it ceases to generate income for the bank. A ‘Non-Performing Asset’ (NPA) was defined as a credit facility in respect of which the interest and/ or instalment of principal has remained ‘past due’ for a specified period of time. NPAs are further categorized depending upon the time periods for which the payments have been overdue.

Gross bad loans at commercial banks could increase to 8.5 per cent of total advances by March 2017, from 7.6 per cent in March 2016, according to projections by the RBI in its Financial Stability Report released earlier this year during the tenure of Dr. Raghuram Rajan. 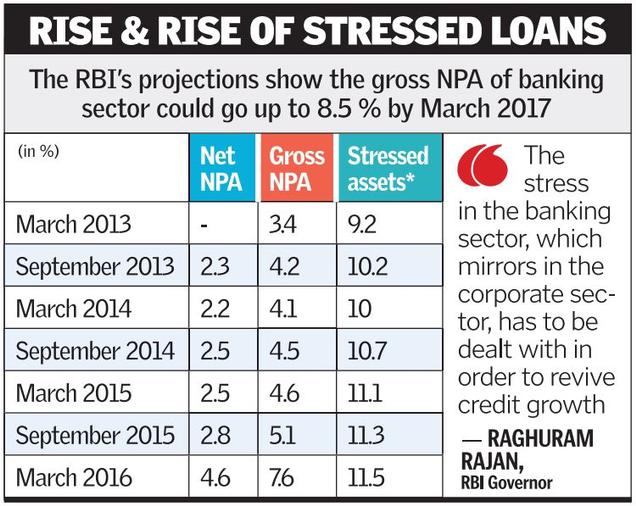 A few important reasons for the constant increase of NPA are as follows:

Recent remedies and their impact

RBI has recently released the following guidelines to ease the pressure on the banking sector:

However, the above guidelines are not being viewed very positively due to the following concerns:

There is a need to avoid hasty provisioning and write-offs, for merely reducing NPAs at enormous cost to the entire system. The regulatory authorities have to play a more proactive role in prevention with more supervisory oversight on credit management in banks. Lastly, a huge importance needs to be given to training and skilling the bank executives with relevant skill set.

Judging the Judges: Is it needed?

In news: Recently, the law department in Gujarat, on the recommendation of the Gujarat High Court, cracked the whip on 17 judges from various cadres in lower courts, ordering their retirement for unsatisfactory performance.

Assessing the judges- India and abroad

Situating law in the land

When an icon falls

A Story Of Two Bills

Arrest this drift in ties with Bangladesh