Indian policy makers have been progressing fast on the issue of transgenders. Recently, the cabinet also approved the Transgender Persons (Protection of Rights) Bill 2016. Government is also evolving mechanisms for their social, economic and educational empowerment. Efforts need to be put to mitigate the stigma, discrimination and abuse against this marginalized section and bring them into the mainstream of society. It will lead to greater inclusiveness and will make the transgender persons productive members of the society.

Transgender community is among one of the most marginalized communities in the country because they don’t fit into the stereotypical categories of men or women. Consequently they face a lot of problems such as:

In 2014, the Supreme Court passed a judgement which was a result of the petition filed by the National Legal Services Authority. The judgement also known as the NALSA Judgement allowed the transgender to avail benefits provided by the state in equality to the other citizens. It also gave them an option of identifying themselves as the third gender          .

The judgement also required the Centre and States to take steps to treat them as socially and educationally backward classes and extend reservation for admission in educational institutions and for public appointments.

Also, all important identity documents such as birth certificate, passport, ration card and driving licence would recognise the third gender. Gender identification was very essential for further provision of many rights such as the right to vote, own property and marry.

As a result of the NALSA judgement, a few Indian states such as Manipur, Odisha, Maharashtra, Delhi, Karnataka and Kerala have formed Transgender Welfare Board for the purpose of extending existing welfare schemes to transgender communities.

However, the creation of such boards and welfare measures has had its own set of limitations and obstacles:

Tamil Nadu also formed a Transgender Welfare Board, before the NALSA judgement was passed, for the welfare of a small community of transgenders known as Aravanis. This board also had flaws similar to those mentioned above.

The Transgender Persons (Protection of Rights) Bill, 2016 also has a provision for a district screening committee to certify a person’s third-gender identity in the form of a transgender card. The need for certification by a committee, could be for administrative purposes such as deciding the benefits under welfare schemes, allowing for a change of name etc but it is still against the promise made by the NALSA judgement, which allowed self-identification to be the basis of such certification.

Limitations of the Bill

Apart from the social challenges that the transgenders face, the Transgender Persons (Protection of Rights) Bill, 2016 has the following shortcomings:

Universal Basic Income: is it coming to India?

In news: the NDA government is seemingly considering the idea of ‘Universal Basic Income’ or a regular state payment to all citizens regardless of their employment status. This scheme is likely to be included in the Economic Survey. However, it is unlikely that the scheme will be implemented- just yet.

What is Universal Basic Income? 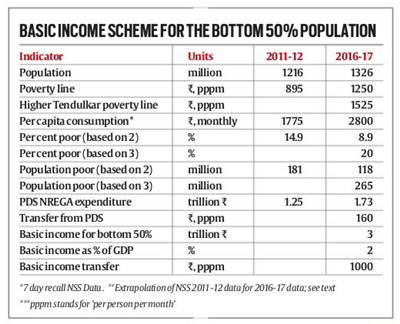 If there is no change in consumption since 2011-12, there can be calculations made about the magnitude and efficacy of income transfer policy. (It is made on reasonable assumption as the real distribution did not change between 1983 and 2011-12).

The data of 2011-12 from NSS survey and assumptions of 2016-17 based on approx. consumption data from wage data for ploughman and carpenters.

Hence, there is an efficient way for the government to eliminate poverty on an ongoing basis, and to help the lower middle class as well.

In Madhya Pradesh, UBI was launched in 2010 where every man, woman, and child across eight villages were provided with a modest basic income for a period of 18 months.

This scheme improved nutrition among the children, healthcare, sanitation, and school attendance and performance.

The most striking thing observed was that emancipatory effect was greater than the monetary effect. It enabled people to have a sense of control. They pooled some of the money to pay down their debts, they increased decisions on escaping from debt bondage. Even the women developed their own capacity to make their own decision about their own lives.

The governments of Canada and Finland are identifying the possibilities and exploring the aspects of UBI through pilot projects. The old system of income redistribution has broken as wages will continue to decline and insecurity will continue to grow. Though UBI is not a panacea but there is a need for a new income distribution system. Hence, there is a requirement to believe in progressive change wherein this debate is enthusiastically taken up to explore various dimensions which can have possible major impacts on socio economic canvass of the country, especially its poor population.

Idea of a UBI for India

Clamping down on ordinance raj

When banks are awash with cash

A vision for reconciliation

Leaping from a strong foundation

Why Portugal can be an attractive investment destination for Indians

Remembering Macaulay, the imperialist we love to hate