1. Discuss the ideas of Gandhi on Gram Swaraj and rural economy.

Gandhi really wanted ‘Swaraj’ of self rule by the people of India who represent the rural mass. He observed “India’s soul lives in the village.” He wanted that power structure should be begin from the below. Gandhi wanted true democracy to function in India. He, therefore, observed.” True democracy cannot be worked by twenty men sitting at the centre. It has to be worked from below by the people of every village.” He dreamt of village republics in term of Panchayat in the free India. Gandhi said, “Panchayat Raj represents true democracy realized. We would regard the humblest and the lowest Indian as being equally the ruler of India with the tallest in the land.”

Mahatma Gandhi advocated Panchayat Raj, a decentralized form of government where each village is responsible for its own a?airs, as the foundation of India’s political system. The term of such a vision was Gram Swaraj.

According to Gandhi, “My idea of Gram Swaraj is that it is a complete republic, independent of its neighbor for its own vital wants and yet interdependent for many in which dependence is necessity.”

Gandhi’s  Gram Swaraj  is man-centered non-exploiting decentralized, simple village economy providing for full employment to each one of its citizens on the basis of voluntary co-operation and working for achieving self-su?ciency in its basis requirements of food, clothing, and other necessities of life.

Gandhi strongly advocated for decentralization of economic and political power through the organization of Village Panchayats. Gandhi wanted true democracy in India. According to Gandhi, “True democracy cannot be worked by twenty men sitting at the centre. It has to be worked from below by the people of every village.” In simpler words, the fundamental concept of Gram Swaraj  is that every  village should be its own republic. Gandhi proposed to work from bottom upwards. He said Independence must begin at the bottom. Thus every village will be a Republic or Panchayat having full powers.

Gandhiji made it very clear that concentration of either economic or political power would violate all the essential principles of participatory democracy and thereby of Swaraj. To promote decentralization, Gandhiji suggested the institution of village republics both as institutions of parallel politics and as units of economic autonomy. Village being the lowest unit of a decentralized system, politically a village has to be small enough to permit everyone to participate directly in the decision-making process. It is the basic institution of participatory democracy.

According to Mahatma Gandhi, utilization of the local resources is quite fundamental to the development of the Panchayat Raj system. The Panchayats with the Gram Sabhas should be so organized as to identify the resources locally available for development in the agricultural and industrial sectors.

Mahatma Gandhi advocated for a village based political structure fostered by a stateless open society for the establishment of Gram Swaraj. He strongly pleaded for decentralization of economic and political power through the organization of village Panchayats and believed in concept of ideal village but the present scenario of Panchayati Raj in most of states leads us to conclude that Gandhian  vision of Gram Swaraj remains an incomplete agenda. Lack of Political willingness of the state government, ine?ciency of the leaders, absence of cordial relationship among the o?cials and non-o?cials, corruption among them, political unawareness of the local people are other factor that hinder the proper development of this institution. Gram Swaraj should be implemented in the spirit in which Gandhi has conceived it but at present our villages are su?ering from social discords, casteism and narrowness.

Note: The idea of Gram Swaraj was not exclusively political, but both political and economic. So you need to tackle both the aspects together.

He differed from many of his contemporary intellects including Gandhiji for inward looking nationalism. He opposed British oppression of Indians not because of India being his mother country but because he saw it as oppression against humanity. He was equally vocal against Japanese rise. He criticized Asia’s pride Japan for their colonist agenda and aggressive foreign policy. He was not in favour of seeking Japanese help(by INA) in India’s freedom struggle.

He was also a champion of encouraging greater dialogue between civilizations for ending misconception and restoring peace. War and unrest according to him were result of mistrust rooted in miscommunication of ideas and wrong perception about each other.

In today’s time, he would have been very displeased with growing protectionist and inward looking policies of major countries. Also to tackle issues like International terrorism, human trafficking, drugs trafficking, climate change which are not any one nation’s problem but detrimental to entire humanity, we need to have leadership having internationalist Outlook as Tagore’s.

3. On many occasions, Nehru and Patel had different views but in spirit their ideas always favoured national integration and unity. Elucidate.

4. Why having a healthy savings rate is essential for a developing economy? Where does India stand on this front? Examine.

A savings rate is the amount of money, expressed as a percentage or ratio, that a person deducts from his disposable personal income and saves it or invests it for a specific purpose –generally earmarked for longer-term objectives, the most common being retirement, buying a home and education or to deal with unexpected emergencies such as a medical problem or urgent housing repairs.

Healthy savings rate facilitates consumption smoothing, which is particularly important in developing countries where incomes are often at subsistence levels and falls in consumption could have disastrous consequences.

High savings also allows the self-employed to accumulate funds for making investments in their businesses or covering shortfalls in operating cash flow. Saving empowers poor individuals by shifting the saver’s perception of his or her situation from “a day to-day struggle to survive to a longer-term view based on planning with a growing cushion of savings.”

High levels of national savings increase the amount of domestic resources available for investment and decrease the need to resort to foreign borrowing in order to cover domestic investment and consumption demand. Countries with low internal savings rates must borrow from abroad, which results in a debt service burden but currently this is not possible for developing countries like India because of the huge debt overhang.

In developing nations, households tend to be large and poor, they have a different demographic structure, more of them are likely to be engaged in Agriculture and their income prospects are much uncertain and hence healthy savings rate is crucial requirement in a developing economy to grow and sustain.

In light of these, this clearly underlines the importance of savings mobilisation to sustain economic growth with domestic financial resources.

India’s stand on this front:

One is required to provide why Savings rate is falling in India.

The Economic Survey pointed out that Indians have the tendency of overspending during boom years and over borrowing during a slump in the economic activity. Thus there is a need to manage out current tendency to save – both at government and at personal level. A healthy savings rate can help in the following way:

The situation in India is as follows:

Savings rate is a part of a person’s income after tax deduction which a person saves for investments or as a future insurance. A healthy savings rate is essential for a developing economy as it reflects in the increased retail participation in debt instruments, retail investments, investments in insurance and pension schemes etc. Through the investments attained from the savings of the retail participation a developing country can further investment on infrastructure, sectors of economy, health care, improve public investment and pursue its soci-economic development goals.

Savings rate in India in marginal, skewed and is inequitable. Due to informal sector employment, jobless growth, poor labor wages, contract labour, structural unemployment in India the working population is unable to save money as majority of income is used for subsistence requirements. Further due to poor financial inclusion population is unable to deposit and invest its savings. Steps like UBI, financial inclusion, formalisation of the economy etc. should be adopted to improve the savings rate and promote retail participation in financial investments.

5. 15 years have passed since the Godhra riots. What is your assessment of the current atmosphere in the country on the yardsticks of communal harmony and politics.

India is a vast country, with people belonging to different religions living amicably for centuries together. The rich traditions of tolerance, perseverance, plurality and assimilation have kept the identity of the country intact, and civilization thriving. Declared a secular country in the constitution, India has several provisions for protection of minority communities. The State does not discriminate on the basis of any particular religion. There are constitutional provisions for equality of opportunities for all.

Despite precautionary, preventive and positive measures having been envisaged in the constitution, to rule out any feeling of being left-out, communal disturbances keep recurring. The Government had, often expressed its commitment toward maintaining communal harmony in the country, and has been taking steps- statutory, legal, administrative, economic, and so on.

In your assessment, one needs to highlight both aspects – i.e. positive and negative – with suitable examples. What initiatives and advancements have been made to improve the communal harmony and to keep religion separated from politics? And also some contemporary issues or concerns affecting communal harmony.

Keep in mind: The Godhra riots were qualitatively different in that it was the state-sponsored violence against the minorities.

India’s survival as a multi-religious, multi-lingual, multi-racial, multi-cultural society will depend on how successful it is in working its secularism.

The above analysis shows that a great deal remains to be done if secularism is to become a way of life in India. This will be possible only if there is a real political, social and intellectual commitment to it and, the state and central governments, the political parties, the civil society and the media strive for it. 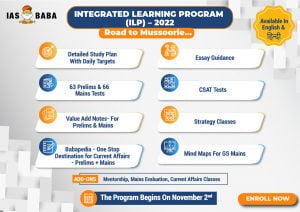