A shift towards Electric Vehicles(EVs)

In May 2017 Nagpur became the first Indian city to have an electric cab fleet—with about 100 EVs from the Mahindra stable and around 100 e-rickshaws from Kinetic linked to the Ola transport aggregator platform. Also, the state-run power giant NTPC set up its first Electric vehicle(EV) charging stations in Delhi and Noida.

This marks a sharp shift from the current policy that incentivizes both hybrid vehicles – which combine fossil fuel and electric power – and electric cars.

In its report Niti Aayog recommends-

In 2015, as part of the National Electric Mobility Mission Plan (NEMMP), the government had launched the FAME India (Faster Adoption and Manufacturing of Hybrid and Electric Vehicles) scheme with an aim to promote eco-friendly vehicles, offering incentives on electric and hybrid vehicles. The FAME India scheme is aimed at accelerating sales of eco-friendly vehicles to up to 7 million vehicles by the year 2020. However, sales of EVs have been abysmally poor.

If these challenges can be tackled effectively and India can leapfrog to EV technology, then of course, the benefits to be had are numerous.

The focus should not only be on EVs:
Apart form EVS there also other technology options which shouldn’t be ignored.
Like,
Hydrogen-powered fuel cells
It offer an equally eco-friendly option.

Both are zero emission, and the hydrogen-powered fuel cells can in fact be recharged faster.

They also give more mileage than the lithium-ion batteries commonly used in EVs today.

They are cheap, almost as clean as EVs, and the related infrastructure is already in place.

The government should not be deciding the winner?
Issue:

Governments generally do not have a good track record when it comes to picking tech winners. For example,

After the 1970s energy crisis in the US, the Carter administration pumped millions of dollars into thermal solar technology which did not yield any viable commercial results even as the old photovoltaic cell technology continued to evolve. Later, corn-based ethanol was all the rage and the government again put good money into developing a market for it but eventually it too collapsed.

These examples indicate there are many risks associated with the government picking the winner—a job that is better left to the market and industry.

Introduction:
Wind energy in India has seen steady development in the last decade. With 32,279.77 MW of installed wind generation capacity (compared to 12,288.83 MW of solar power), India is one of the leading generators of wind energy worldwide. Yet, due to certain constraints, and more recently the more competitive rates in solar energy, there are concerns that the share of wind energy may decline.

Benefits of wind power over solar power:
Unlike non-storage solar energy, wind turbines are not affected by night and day.

Government’s policy towards wind power:
The government has announced that its target for wind energy generation by 2022 is 60,000 MW.

How does it work?
The basic idea is to locate the kites, which are essentially light and controllable aerodynamic flying devices, in a formation at heights of around 750 metres and more in order to harvest the strong and consistent winds available in that region of the atmosphere (wind velocity at those heights is twice that at the ground level) and thus generate low-cost energy.
The system is operated in periodic pumping cycles, alternating between reel-out and reel-in of the lines attached to the kite and the drum on the ground. During reel-out, the kite flies in figure-eight manoeuvers at high speeds of 70 to 90 km/h, creating a high traction force which is converted into electricity by the drum and the connected generator. Once the kite reaches the maximum height, it is de-powered by releasing the steering lines so that the whole wing rotates and aligns with the wind. Using the drum/generator module as a winch, the kite is then pulled back to the initial position to start the next pumping cycle. De-powering reduces the traction force during reel-in by 80 per cent, thereby allowing less energy to be consumed as against the energy generated during the reel-out cycle. Once the descent is complete, the kite is allowed to climb once more, where it generates electricity once again. This allows these kites to be more efficient than traditional wind turbines. 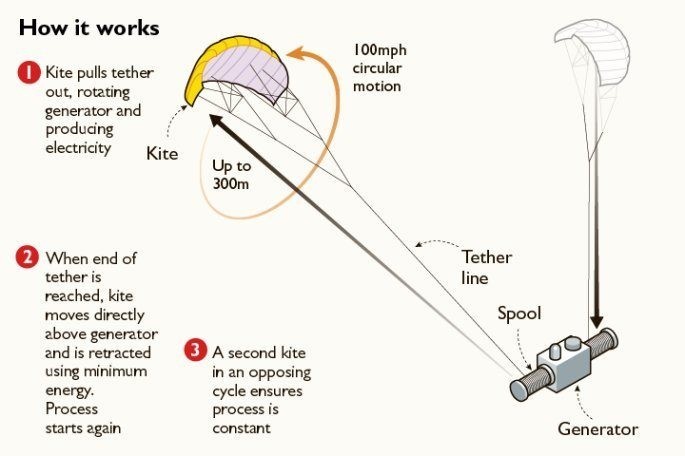 Challenges:
Some technical issues will have to be resolved before these kites can replace traditional turbines.

Although India is no longer deemed power-deficient, it is by no means energy secure as millions of people do not have access to grid connections. As connectivity increases, the demand for power will surge. Moreover, initiatives like Make in India, Power for All Campaign for total rural electrification by the end of 2017, and the drive to ramp up the use of electric vehicles in place of fossil fuel-based vehicles, among others, will see a quantum jump in energy consumption. While evolving solar technology can fill some of the gap, the government should also look at other new energy technologies across the energy spectrum to meet its energy generation target. India’s record in wind energy development is good. But the existing technology is fast becoming outdated. Evolving technologies like kite wind should therefore be considered.

Economic forecasting is not a science

The crops of wrath

The right balance-China, Pakistan and India

Whose fight is it anyway?

Why are telecom firms in the doldrums?

The evolving state of Indian states