Since the 1970s, the nature of urbanisation across the globe, including India, has been increasingly shaped by corporate capital under the neo-liberal policies of the state. Cities are treated as consumer products, with massive private investment in real estate and housing, malls, expressways, flyovers, waterfronts, sports and entertainment facilities, and policing and surveillance to promote corporate urban development. Urban amenities and services are privatised, and labour reforms are undertaken to benefit corporate capital.
The urban poor, slum dwellers, and migrants (both male and female) are dispossessed as a result of urban restructuring and gentrification. These exclusionary processes began in 1990 and are acute in Indian cities like Mumbai, Delhi, Bengaluru, and Hyderabad.

The central government started the Jawaharlal Nehru National Urban Renewal Mission in 2005—which was renamed as the Smart Cities Mission in 2015—with the primary aim of accelerating neo-liberal urbanisation policies to promote economic growth.
This has also led to various urban protests and movements in different parts of India related to such issues as the restructuring of urban space, demolition of slums, displacement, and the relocation and privatisation of urban amenities.

Migration raises the central issue of the right to the city: the right of everyone, including migrants (men and women), minorities, and the marginalised to access the benefits that a city offers.
The right to the city perspective ultimately seeks to achieve urban transformation that is just and equitable in contrast to urbanisation based on neo-liberal policies, which promotes exclusion, deprivation, and discrimination.
Right to the city is also expected to unite disparate categories of deprived people under the common vision of building our future by building cities.
The right to the city is not an exclusive individual right. Rather, it is a collective right, which aims to unify different exploited classes to build an alternative city that eradicates poverty and inequality and heals the wounds of environmental degradation

While it is true that cities have evolved through migration, cityward migration, and interstate migration in particular, has been sensitive issue in India. India is a federal country and states are organised along linguistic lines. Linguistic differences are essentially cultural differences, which are pronounced in the event of migration.
In India exclusion and discrimination against migrants takes place through political and administrative processes, market mechanisms, and socio-economic processes.

In cities like Delhi, Mumbai, Kolkata, Bengaluru and Pune, there have been increases in female migration. In fact, the increase in female migration is evident across all classes in urban centres. Women constituted the majority of migrants in most cities between 2005 and 2006. As most of these women do not work, this shapes their relationship with the city, especially with regard to access and use of the city space and resources. On the other hand, their contributions as homemakers and family-care providers are enormous, but seem to be structured through the continuity of patriarchal traditions transmitted from rural to urban areas. 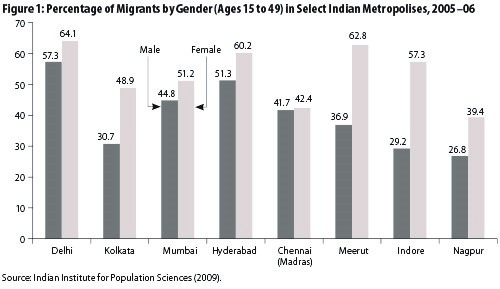 National statistics on migration show why men and women migrate: 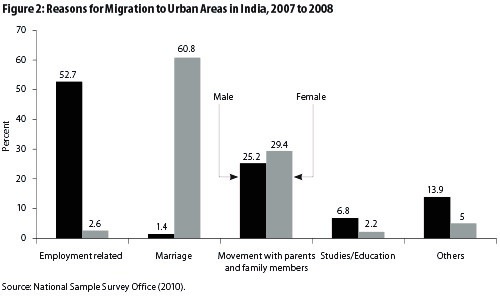 There is a huge disparity between men and women migrants in urban areas. The available data indicate that the participation of women migrants in the workforce has declined; about two-fifths of those who were either self-employed or casual workers prior to migration lost their work after moving to urban areas as per the 64th round of the National Service Scheme (NSS) survey conducted from 2007 to 2008. This shows some amount of de-feminization of the migrant workforce.
Women in the city suffer the consequences of being migrants and women, in addition to inherent sociocultural prejudices and economic deprivations. Migration adds to the existing baggage of inequality and discrimination. Migrant women not only face wage discrimination, but also sexual violence and various types of exclusion, such as restricted access to the public distribution system for food, to shelter and medical facilities, and may even have limited voting rights. Many women migrant construction workers are denied access to crèches, drinking water, sanitation, and toilets.
Urbanization is often associated with the greater independence of women and the erosion of patriarchal power relations and values.
However, Indian cities have failed to achieve the goal of gender equality, as patriarchal norms continue to play an important role in the urban social structure—these norms have been transplanted to urban areas from rural areas through migration with few social reforms.

The issues mentioned above should be a central concern for city planning and development agendas, and efforts should be made to integrate migrants and women politically, economically, socially, culturally and spatially. This requires an enormous change of attitude in those who appropriate and dominate cities towards the processes of migration and urbanization. A historical understanding of the processes of migration and urbanization, and migrants’ roles in building cities, must be highlighted.
The democratization of city governance, and the political inclusion of men and women migrants in decision-making processes, are important steps to ensuring the right to the city for all, for promoting alternative urbanization, and building cities based on the principles of freedom, human development and gender equality.
A gender perspective on the right to the city envisions the safe movement of all women (including migrant women) within a city, their safety and security in both public and private places, access to the social and economic resources of the city without any prejudice, and their participation in building the city. This requires a paradigm shift in the ideology of a city from being a source of gross domestic product and economic growth to a space that is environmentally sustainable, woman-friendly and inclusive.
In this light, the constitutional provisions under the 74th amendment to reserve one-third of seats for women in urban local bodies should be implemented in letter, spirit and practice. Women should be given responsibility in planning and decision-making processes in municipal administration bodies.

Disease that won’t go away

Cause for caution not gloom